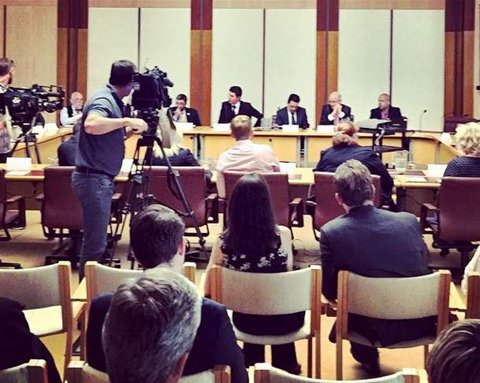 The Australian Greens and a number of independent MPs today joined members of the telecommunications industry and civil liberties groups to protest against the Government's plan to 'rush through' legislation forcing carriers to retain Australians' non-content or metadata for up to two years.

The group plans to deliver a letter to the minister behind the "deeply flawed" proposal, Attorney-General George Brandis, as well as Shadow Attorney-General Mark Dreyfus, to formalise their concerns about the policy.

Members of the Electronic Frontiers Australia, the Institute of Public Affairs, the Australian Privacy Foundation, Civil Liberties Australia, plus industry groups ACCAN, AMTA, the Comms Alliance and others voiced their opposition to what they said was an effort to push through legislation without any scrutiny.

A draft mandatory data retention bill was expected to be introduced into Parliament this week, but it is yet to be listed for debate.

The event attendees voiced strong concerns about the privacy and security of the retained data, the burden of cost on the service providers, and also how effective the system will be for cracking down on serious crime - which they say has not yet been proven.

"There's a complete lack of a business-like approach. There is no case made, no evidence presented, there are no facts provided.﻿﻿ It's simply the suggestion that it will save us all from death and destruction, and 'just trust us, we're from the Government and we're here to help you'," iiNet chief regulatory officer Steve Dalby said.

"[The petabytes of data generated] will never get utilised, it's a totally wasteful process. If it's going to cost us $500 million, $600 million to put this process in place, the Government is going to have to spend as much as that again to extract useful information out of the metadata."

Dalby said if the industry was forced to comply with the program, it would look for the cheapest cost option - which he said was cloud storage hosted out of China.

Shadow Communications Minister Jason Clare last night said the opposition - which broadly supports the proposal - wanted the Government to publish the draft legislation and commit to sending it to a parliamentary committee for scrutiny.

"The Australian public should have as much opportunity as possible to consider the proposed regime and provide their views before this proposal becomes law," Clare and Dreyfus said in a combined statement.

The Government has remained tight-lipped about the contents of the data retention bill since announcing its proposal in August, and has failed to provide a consistent definition of what it constitutes to be metadata.

A confidential consultation paper issued to select members of the telecommunications industry in August, sighted by iTnews, gave the first insight into the types of metadata the Government wants retained under the banner of national security.

It said that despite previous comments by two Government ministers, the specified dataset would not involve the retention of “web address identifiers” such as destination IP addresses or URLs.

A bill for data retention would form the third tranche of national security legislation to be introduced by the Government before the end of the year.

The first expanded the legislative powers of Australia's spy agency ASIO, and the second, the 'foreign fighters bill', passed the Senate today with amendments that removed efforts to expand the types of biometric data collected at the country's airports.