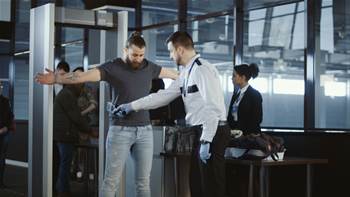 Australian Border Force conducted over 41,410 warrantless - but legal - searches of electronic devices at the country's borders between 2017 and 2021, iTnews can reveal.

iTnews can also reveal that travellers don't have to be informed of their rights by border officials. These rights include that "travellers have no legal obligation to provide a password/passcode or provide assistance to access an electronic device at the border."

The ABF said officials "may" advise travellers of their rights, but there is no policy requiring them to do so.

The ABF's broad search powers enable the agency to conduct device searches for a variety of reasons, including on suspicion that a traveller has or intends to engage in work prohibited by their visa.

“There are many instances under which we may examine a traveller’s device, for example, visa-related issues, counter-terrorism and prohibited items,” an ABF spokesperson told iTnews.

Searches are also made on behalf of, and copied data shared with, other federal agencies.

iTnews has obtained numbers on device searches at Australia's borders via a freedom of information request. [pdf]

Due to inconsistencies in the way data is recorded, it is not possible to determine the type of device searched, nor whether the device belonged to Australian citizens or foreign nationals, for the full five-year period.

Instead, the FOI shows that:

The ABF said that it "retains data on the number of searches, and the details of those searches."

A spokesperson would not say if it had accessible data on how many of the 41,410 searches resulted in an outcome - such as the discovery of prohibited items, arrests or convictions - nor if that data could be released.

Border Force told iTnews that "travellers have no legal obligation to provide a password/passcode or provide assistance to access an electronic device at the border."

However, an ABF spokesperson said travellers only "may be advised" of their rights.

There is no internal policy that requires border officials to inform passengers of their rights.

This reflects the experiences of travellers that have been subjected to device searches at the border.

Sean Bedlam, a member of Whistleblowers, Activists and Communities Alliance (WACA), told iTnews he was not told of his right to withhold his passcode when his phone was searched on his way back from a trip to the UK visiting his family in late 2018.

“They did not tell me I was not legally required to provide the passcode," he said. "I thought it was legal because they were asking.”

Bedlam said his phone was taken out of his sight for about 40 minutes before customs officers returned it.

“From the end of 2011 for the next several years I was fairly routinely involved in civil disobedience protests, and I was arrested several times for things like going inside the US consulate building with WACA to protest the treatment of Chelsea Manning, or protesting the treatment of refugees at ABF’s office," Bedlam said.

“The charges were dropped each time I went to court, though. I was never convicted of anything; the worst I’d got was a 12-month good behaviour and diversion [programs]. I have no criminal record.”

A software developer whose phone was searched at the border on his way back from Fiji posted on Reddit earlier this year that he and his partner were “both Australian citizens with no criminal records, no associations with any criminals/religious groups/gangs/political groups.”

ABF said the agency could not comment on individual cases.

Devices can be taken offsite for forensic 'examination'

If a traveller exercises their right to refuse to provide a passcode, their device can be taken from the border and given to the ABF's digital forensic team for examination.

“Most devices held for examination are returned to the traveller within 14 days, and often sooner if no material is found to warrant further investigation,” an ABF spokesperson told iTnews.

“Some devices may need to be held for longer but only under exceptional circumstances, such as for technical reasons or for those devices that contain vast amounts of data.”

Home Affairs has tenders with Grayshift, and until last month, Cellebrite, both companies that sell software for bypassing smartphone passcodes to extract data.

Dr Suelette Dreyfus, senior lecturer at the University of Melbourne and an academic researcher in cyber security and privacy, said the warrantless searches were deeply worrying.

“With no evidence provided showing the need for such highly invasive power, with no data showing what percentage of these devices’ search and seizures has directly led to any real successful prosecutions, it’s time for this heavy-handed overreach by Border Force to end," Dreyfus told iTnews.

“The fact Border Force suddenly stopped keeping records on how many Australian citizens they have done this to, as opposed to foreign citizens, looks suspiciously like they are trying to hide the fact they are harassing a lot of Aussies.

"These records are easy to collect – why the change?  They’ve not provided any good reason.

“We live our lives on our phones these days – as anyone who has ever lost their phone can tell you. Your professional contacts, access to all your social media accounts, your mail, banking, photos, car-share trips – your whole life history sits in one small hand-size device.

“Forcing you to hand over your entire life to a policing authority with no court order, and no transparency about exactly why is an affront to our basic human rights."

Dreyfus called on the newly-elected federal government "to overhaul this draconian behaviour and the outdated laws that support it.”

Incoming Minister for Home Affairs Clare O’Neil declined to comment for this article.

Digital Rights Watch executive director James Clark told iTnews that “searching these devices is a serious invasion of privacy and it should require reasonable suspicion and a warrant.”

“The high number of phones that Border Force have searched suggests they are likely searching phones just because they can, rather than a reasonable suspicion of a serious crime," Clark said.

"An immigration officer's whim isn't a good enough reason to give up your right to privacy.

“This is another example of why we need an Australian Charter of Human Rights in Australia. Without a legal framework or a culture of defending human rights and freedoms, these kinds of invasive powers just continue to grow unchecked."

Clark also raised concerns that "people are being pressured into handing over the passcode to their device, despite not being legally required to do so.”

“People obviously feel vulnerable and intimated in these contexts," he said.

"We would be very concerned if Border Force is simply intimidating people into giving up their rights.”