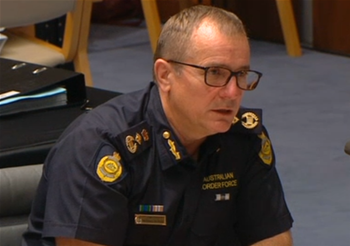 And the ABF will probably do it again.

The question was raised by Independent senator Rex Patrick in reference to a report in The Guardian last month where a software developer returning from Fiji was made to provide his passcode and phone to a customs officer at Sydney Airport, without being given a reason.

ABF Commissioner, Michael Outram, took questions on notice regarding how often the power was exercised or whether the Customs Act allowed ABF officers to compel a traveller to reveal a passcode.

“Normally if someone’s walking down the street and they [law enforcement] wanted to look at the contents of someone’s phone…they might require a warrant for example,” Patrick said.

“So we’ve got a situation where you could be walking through an airport coming into Australia and there’s an exception to that?”

“I can’t speak to the individual case,” Outram told the Legal and Constitutional Estimates committee.

"But obviously we have the customs function at the Australian border. So part of that function is examining goods to identify whether there is duty payable or whether there is for that matter any prohibited material associated with the goods.

“A lot of people unfortunately bring into Australia prohibited items including on their mobile items, whether that be, you know, to do with child pornography…not to suggest the person had that sort of material on their phone, but you know there are other things that they may search for as well.”

The man whose phone was confiscated posted on Reddit that he and his partner are “both Australian citizens with no criminal records, no associations with any criminals/religious groups/gangs/political groups.”

Outram said searches were also made on behalf of requests from other agencies.

“We have a system at the border where other law enforcement partners can give us sufficient ground to search for a particular thing.”

The return traveller said he was concerned that during the 30 minutes he was separated from his phone that ABF had access to his “photos going back for many years...My entire Gmail history...My work emails...Saved logins/passwords...Every Whatsapp/SMS conversation I have ever had.”

“And what happens to this data? How is [it] stored? Who has access to it? Is it shared with any other government organisations? Is there a retention policy, or does it live in their system forever?”

Outram said ABF did make copies of data during searches in response to a question from Greens Senator Nick McKim on whether ABF “download data”, and if all the data they download is relevant to “the reason that the officer had for seizing the phone in the first place.”

Outram said “in this day and age when you’re trying to do searches of devices there could be terabytes of data and the only way to sift through it is electronically. So you may well download data that isn’t of interest to your reason for downloading a particular thing.”

“You can’t and you haven’t got the time to pore over data to find the thing you’re after. You’ve got to run the searches.

"There are strict rules of course about how you handle and manage that data.”

An international airport passenger sued ABF for sending text messages then deleting them on his phone while it was confiscated in 2016.

The ABF officer from the department’s counter-terrorism unit was found to have breached a code of conduct, according to a freedom of information request released in 2016.