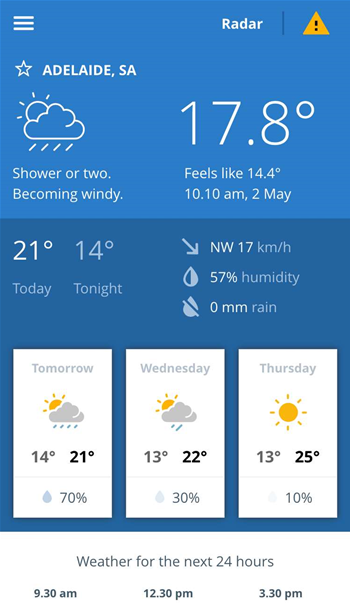 The Bureau of Meteorology has launched its first-ever weather application for iOS and Android, giving Australians a snapshot of current and forecast weather from across the country.

A rain radar and weather warnings are also included, alongside the ability to set favourite locations.

The BoM feeds data "continuously" into the app from its Australia-wide network, and has prioritised data that is the most requested from its website. More detailed weather information will remain on the website.

It's the first time the weather bureau has offered an application for mobile; smartphone users have until now been forced to rely on third-party offerings.

The BoM does not yet offer a widget for the home screen, unlike its third-party rivals. The weather bureau is encouraging users to provide feedback and suggestions for improving the app.