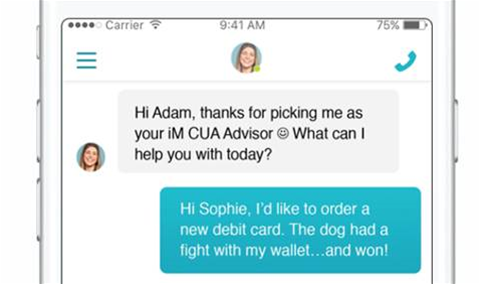 Customer uptake speaks for itself.

Whereas most other financial institutions (and, well, most other companies) are adopting automated and AI solutions for customer-facing tools, CUA went in the opposite direction in developing the iM app.

The success of the iOS trial, which helped bring in an additional $11.6 million in new loans and had a higher net promoter score compared to the credit union’s standalone app (53 versus 39.9), led to the app being made available to all CUA customers using compatible iPhones and Android devices.

Through iM CUA, customers have their pick of a range of “personal bankers” who would then become the single touchpoint for interacting with the credit union, interacting through the app’s instant messaging or video chat capabilities.

Silicon Valley-based innovation lab Pivotus Ventures was brought on board for the development of the app, and working to an “ambitious” timeline resulted in the app being delivered to members within four months of Pivotus joining the project.

The iOS trial also resulted in a major shift in the demographics compared to those who normally connect with the credit union. The average age of users regressed from 51 years to 47, and new to bank members on the platform averaged just 34 years.

Pilot users were also more engaged with the bank, with almost two-thirds of them having more CUA products compared to around one-third of other customers.

In follow-up surveys, 78 percent of users said they felt like now had a personal connection with CUA.

This project has been named a finalist in the Finance  category of the iTnews Benchmark Awards 2018/19.