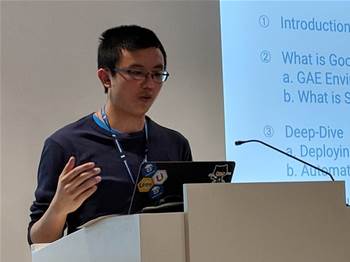 The monPlan project first kicked off in October 2016 as an open source website founded by Jiang and a friend to cut through the complicated, disparate sources of information that students had to sift through to plan which courses they should take.

Monash University reached out to the pair after hearing about the project on social media, inviting them to formally pitch the project and seek funding.

In early 2017 monPlan became the first student-led initiative (with Jiang still only in the second year of his degree) at the university to move away from Infrastructure-as-a-Service towards a serverless architecture and low-ops solutions.

As technical lead for the project, Jiang pioneered many cloud practices that have since become standard at the university as it began a widespread adoption of the Scaled Agile Framework and Google Cloud technologies became the platform of choice for rapid application development.

monPlan in particular leveraged React.js on Google App Engine as its front-end, and Java Springboot framework in the backend.

The result is a planning tool that presents students with an intuitive drag and drop interface, allowing them to easily explore ‘what-if’ scenarios, reducing the number of queries directed to course advisors.

Wait-lists for appointments with advisors have significantly shrunk as more students start to use monPlan, as students can now head in with a clearer idea of the courses they need to take and are armed with more focused questions as a result.

Staff and students alike have expressed their preference for monPlan’s intuitive interface, flexibility, and ease of use over a commercial vendor product.

It also helps with the university’s compliance practices, as the digitisation or automation of workflows and data validation helps Monash maintain a rigorous audit trail for each student course plan submitted, reviewed and enrolled.

The university has already received several requests from other institutions looking to licence monPlan for their own students, providing Monash with an avenue to commercialise and profit from Jiang’s tool.

Eric Jiang has been named a finalist in the Rising Star category of the iTnews Benchmark Awards 2018/19.