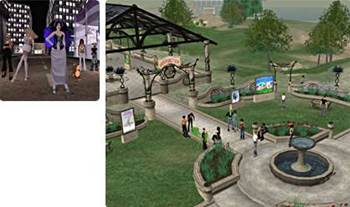 The BBC will air a program in the Second Life virtual world today in the UK as part of an investigation into making money online.

The broadcaster will screen the latest episode of The Money Programme in the Rivers Run Red Cinema in Second Life at the same time that the TV version airs at 7pm on BBC Two.

The BBC will reshow the programme in two additional timeslots at 8pm and 9pm at the virtual cinema to allow more Second Life users to watch.

The focus of the programme is an exploration of money-making opportunities in virtual worlds such as Second Life and World of Warcraft.

Second Life has its own currency, Linden Dollars, which can be exchanged for real world money on Lindex, the Second Life stock exchange.

But the BBC is not the only broadcaster to take an interest in Second Life. This week Sky News opened its own virtual island, featuring an accurate replica of the Sky News studio.

Second Life visitors can check out the equipment and even sit in the presenter's chair.

Sky is using the platform to show news headlines from the real world in what it claims is a bid to give the online community a better understanding of the news.
Got a news tip for our journalists? Share it with us anonymously here.
Copyright ©v3.co.uk
Tags:
andbbcintolifemovesecondskysoftware