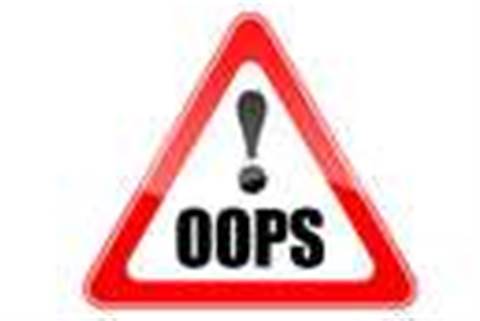 Security maker pantsed after it lets its guard down.

Barracuda Networks was hit with an SQL injection attack over the weekend, with partner contact information stolen.

The security firm admitted it “made a mistake” as its own web application firewall sitting in front of the Barracuda website was “unintentionally placed in passive monitoring mode.”

The firewall was offline during a maintenance window, which opened late on 8 April after close of business Pacific time, allowing hackers to begin their attacks.

“Starting Saturday night at approximately 5pm Pacific time (1am GMT), an automated script began crawling our website in search of unvalidated parameters,” explained Michael Perone, executive vice president and one of the founders of Barracuda, on a blog.

“After approximately two hours of nonstop attempts, the script discovered a SQL injection vulnerability in a simple PHP script that serves up customer reference case studies by vertical market.”

That customer case study database shared the same SQL database used for marketing. The hackers raided the database for names and email addresses of leads, channel partners and some Barracuda employees.

“The attack utilised one IP address initially to do reconnaissance and was joined by another IP address about three hours later,” Perone added.

He said the firm was reminded of a number of lessons from the attack, noting “you can’t leave a website exposed nowadays for even a day (or less).”

Perone warned against being complacent about coding practices, pointing out vulnerabilities can appear in areas far away from where important data is stored.

“We’re glad that the impact will be very minimal, but we’re not happy about the amount of bandwidth we’ve spent assessing what happened, responding to affected parties and putting in place the steps to prevent it in the future,” he added.

“We are working to notify everyone whose email addresses were exposed, and we apologise for the inconvenience.”

Barracuda wasn’t the first firm to get hit by a hack this year. The security division of storage giant EMC, RSA was hacked and its SecurID token data stolen.

Got a news tip for our journalists? Share it with us anonymously here.
Copyright © ITPro, Dennis Publishing
Tags:
apt barracuda firewall flash pwn rsa security
In Partnership With
By Tom Brewster
Apr 13 2011
8:58AM