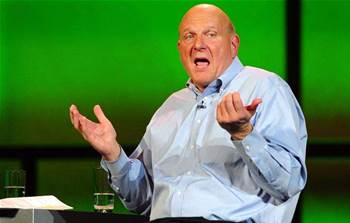 Labelling Windows 8 as “a dawning of the rebirth of MS Windows”, Ballmer told the Seoul Digital Forum this week that “up to” 500 million users would have the operating system by the end of 2013, according to AFP.

An official release for Windows 8 is expected in October, meaning Ballmer's prediction would roughly double the speed of Windows 7 globe.

It took Microsoft until January this year - 26 months after Windows 7's October 2009 release - to reach the same milestone for the previous operating system.

Initial take-up of Windows 8, however, could be spurred on by a simultaneous influx of ultrabooks powered by Intel's new Ivy Bridge CPU.

Microsoft claims those computers compatible with the new BIOS standard UEFI - introduced alongside Windows 8 - would deliver blistering bootup times of less than 200 milliseconds, also spurring on take-up by new and upgrading users.

Whether deployment times can be cut as dramatically as BIOS boot times, however, remains to be seen.

Analyst firm IDC earlier this year gave a cautious outlook for PCs in 2012, but expected growth to pick up to the “high teens” in 2013.

On the enterprise side, Ballmer’s bullish predictioncould be helped by the April 2014 end-of-support deadline for Windows XP, still the most widely-used desktop operating system in the world. Some businesses remain reluctant to upgrade due to use of older machines or incompatible bespoke software.

Microsoft is expected to kick off its Windows 7 to Windows 8 upgrade offer in early June. Traditionally aimed at preventing a slide in sales before the next generation is release, Microsoft will charge US$15 for an upgrade to Windows 8 Pro.