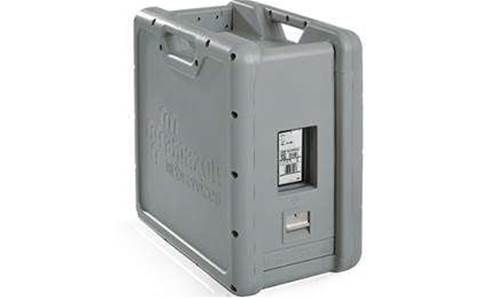 Amazon Web Services has released a rented device that physically migrates data from on-premises hardware to its public cloud.

"Even for companies that have pretty good connections, it's very unlikely you want to saturate the network with moving data to AWS," Jassy said, adding that it would take 100 days to move 100TB of data to the cloud even if 10 percent of bandwidth was dedicated from a 100Mbps corporate network.

"That's why people say: never underestimate the bandwidth of a FedEx truck."

AWS vice president of engineering Bill Vass then showed the crowd a tamper-proof, shock-proof device that looks like a large briefcase. The 50TB storage device, lent out by AWS, is delivered to the customer's premises for ten days to copy the data on.

The Snowball is "rugged enough to withstand a 6G jolt" and weighs 23kg. The device has an external electronic ink display panel, which Jassy described as "a Kindle", that dynamically changes the delivery address for the courier.

The self-contained units have a 10GB network connection for fast data transfer, and the data is encrypted as it is copied onto the device.

The Snowball units are then sent back by the customer for AWS staff to decrypt the data and "copy it to the S3 bucket(s) that you specified when you made your request", according to an AWS blog post. 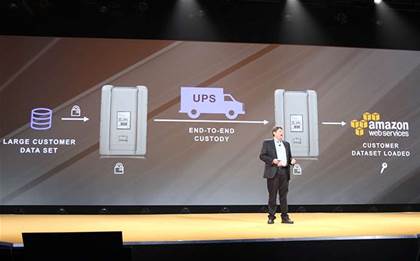 The company said the service was ideal for customers that need to move more than 10TB of data to the cloud.

The Snowball service has a "usage charge of $200 per job" that excludes shipping. The offering is available initially in the US only for migrations into the US Standard and US West (Oregon) AWS regions. Australian availability is currently unknown.

"It's much more cost effective than what you otherwise might to do move that much data," Jassy said at a press conference.

Cosies up with Accenture

The group will offer "integrated consulting and technology solutions" for enterprises targeting a shift to the AWS cloud, according to Accenture.

The unit has drawn dedicated staff from both parent companies "with expertise in cloud solutions architecture and development, marketing, sales, and business development".

Accenture chief strategy officer Omar Abbosh told the crowd at re:Invent that the new unit aims "to be the cloud sherpas for AWS", and has an immediate aim to train 1000 staff from the consulting firm and certify 500 staff on AWS within the first year.

The venture will focus on two strands of work initially. 'Transformation services' concentrates on moving existing enterprise applications to the AWS cloud, while 'analytics and big data services' will see AWS' analytics functionality added to the Accenture insights platform.

"The business group will also explore the creation of new services in high growth areas such as Internet of Things (IoT) and security on the AWS cloud," Accenture said.

Accenture had revenues of US$31 billion for the year ending 31 August and has had a relationship with AWS for almost 10 years.

Tony Yoo travelled to AWS re:Invent as a guest of Amazon Web Services.