AWS' 100PB truck will move your data to the cloud 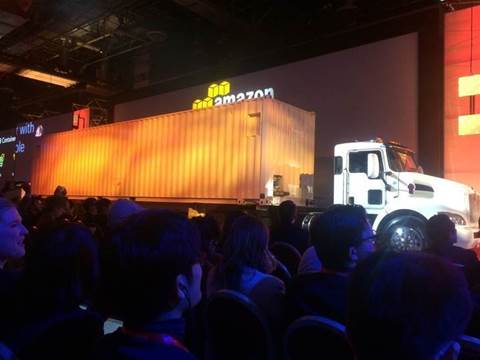 CEO Andy Jassy watched as what has been dubbed the ‘Snowmobile’ -  a 100 petabyte, container-sized data storage behemoth - was driven into his Las Vegas keynote this morning as part of the Re:Invent conference.

The Snowmobile is a dramatic expansion on the petabyte ‘Snowball’ transportable data migration boxes AWS unveiled last year, which can be physically delivered to the public cloud giant for rapid upload.

Jassy said the 45ft, ruggedised, truck-drawn version is a response to customers who wanted to move much larger volumes of data to the cloud.

“Is there something you can do to allow us to move exabytes of data so we can leverage the cloud as well?”

The Snowmobile comes with its own generator - it draws 350 KW of AC power - and a network cable capable of supporting data ingestion at a rate of 1TB per second, which AWS claims can see the storage facility filled in about 10 days.

Jassy said it would previously have taken 26 years to upload an exabyte of data to the cloud over a dedicated 10Gbps connection. With Snowmobile, he boasted, it can be done in 6 months.

AWS is targeting big enterprises and data-hungry start-ups with its new service.

“When we started AWS the notion of an exabyte of data seemed completely out there,” Jassy said.

“Today an exabyte of data is a lot more commonplace. You be surprised how many companies - large enterprises and successful start-ups given the way they collect data - have exabytes of data.”

Satellite operator DigitalGlobe is claiming to be the first customer of the exabyte scale migration solution, moving 100PB of its 16-year time-lapse image library to the AWS cloud.

Snowmobile is currently available in all AWS regions. Jassy said the transfer will be charged at US 0.5 cents per GB, per month.

Paris Cowan travelled to AWS Re:Invent as a guest of Amazon Web Services.