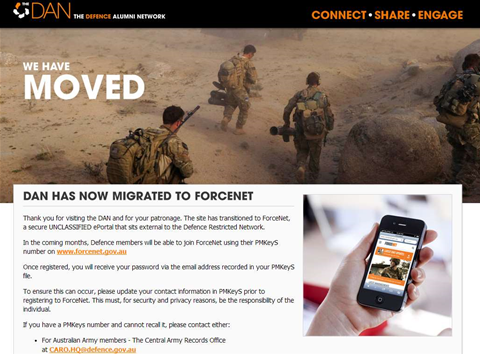 The Australian Defence Force is readying the launch of a new human resources portal akin to a social network, for use by both current staff and alumni of the country’s armed forces.

ForceNet is an internal social network through which Defence workers can connect with colleagues, send direct messages, post content, and create events and social groups.

The system includes HR self-service features including the ability for staff to check pay receipts and submit leave applications, search for vacant jobs, and showcase skills and qualifications on their user profiles.

The ADF intends to use the system to gain a better insight into its workforce to target work more effectively, and to identify what skills are available within its current staff and former employee base for upcoming projects.

The ADF has spent the last year designing the platform - which is based on the SiteCore web content management system - in conjunction with Deloitte, which was awarded close to $2.6 million to develop and maintain the platform from September 2013 until June 2015.

The portal was initially slated to go live in March of this year, but has been held back to an expanded scope.

ForceNet was initially developed for the Army Reserve, but the ADF opted to expand the scope to include all current and former members of the Australian Defence Force and their families.

ForceNet was roadtested by 800 users from six trial units from November 2013 to February 2014 to ensure it was both stable and easy to use. The incorporation of feedback from the trial also pushed back the go-live date.

A Defence spokesperson said the department could not accurately estimate the total cost of the project as its expanded scope has led to uncertainty over future system demands.

ForceNet has allowed Defence to decommission the Defence Alumni Portal (DAN), a previous solution based also on SiteCore.

DAN was deactivated earlier this year, with the administrators moving around 1000 active users and 12,000 user profiles onto ForceNet.

Defence expects that by creating a tight-knit community of past and present ADF members, it will be better able to meet critical skill shortages by recruiting former ADF members back into the force.