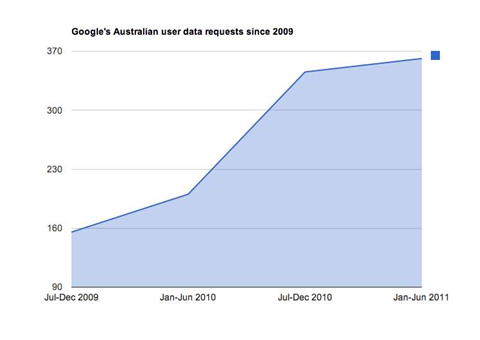 ﻿Google received 361 user data requests from Australian government agencies in the first six months of 2011, continuing its steady rise as a source of information in criminal investigations.

The data requests were related to 412 Google user accounts, a figure Google released for the first time on Tuesday in its latest Transparency Report update.

Google complied with 73 percent of Australian requests, lower than its 81 percent compliance rate during the July to December 2010 period, when it received 345.

It also removed a total of ten items from YouTube and its search database during the six-months to June 2011.

Two items were removed under court order for privacy and security, while requests from government agencies and police led to the removal of eight items from YouTube over issues of defamation, pornography, privacy and hate speech.

Google complied fully or partially with 40 percent of Australian content removal requests over the period. The number of requests had declined from the 17 made by Australian government agencies between July and December 2009.

However, user requests have climbed steeply since Google’s first report in 2009, when it received 155 user data requests from Australian authorities in the six months to December 2009.

Requests have increased steadily since.

US requests have risen steadily, from 3580 in 2009 to 5950 in the last six month block. Requests in France, Germany, Italy have also risen over the past two years.

Requests from England, however, have ranged consistently between 1100 and 1300 since 2009.

Other large nations like Russia showed a lower level of reliance on Google user data requests, with its government bodies making only 42 requests in the current period.