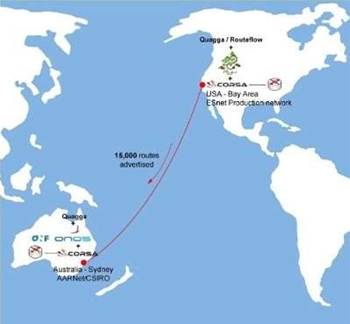 The Australian side has been peering for a month with the Vandervecken SDN router at the US Department of Energy's research Energy Sciences Network (ESnet) situated at the University of California, Berkeley, over a trans-pacific connection. 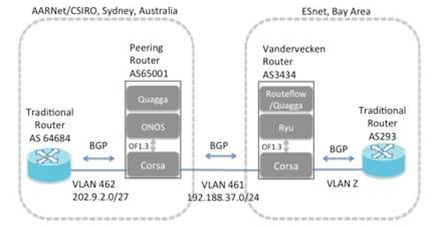 Some 15,000 routes to research and education networks were advertised by ESnet to the Vandervecken router in the US; these were in turn advertised to the Sydney peering router.

Being able to advertise large amounts of routes and interoperate with existing infrastructure demonstrates SDN is viable on a worldwide scale on production networks, the project partners said.

Vandervecken uses SDN router software developed by Google, which is based on the RouteFlow project for virtualised Internet Protocol (IP) routing services, and the Quagga open source software routing suite.

The SDN routing trial was conducted under the auspices of the Open Network Foundation's ON.Lab, which is developing ONOS.

AARNet and CSIRO joined the project, which started off across the Tasman as a collaboration between Google, the Research and Academic Network of New Zealand (REANNZ) and Victoria University, last year.

It was moved out of the country due to uncertainty around new communications security legislation that required operators to notify the NZ Government Communications Security Bureau (GCSB) and seek the agency's approval for equipment and configuration changes for public networks.