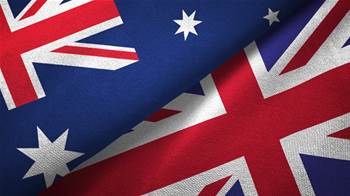 Australia and the United Kingdom have signed a pact to crack down on state-based actors, ransomware groups and other "malign actors" that use cyber attacks to "undermine freedom and democracy".

The agreement is the latest pact to flow from the trilateral security partnership between Australia, the United States and the UK - AUKUS - in September.

AUKUS has already resulted in separate agreements between the three nations to share quantum technology knowledge and protect sensitive technologies.

The new partnership will see Australia and the UK intensify co-operation on cyber and critical technology in a bid to tackle "malign actors" and strengthen global technology supply chains.

Most of the early initiatives under the scheme relate to cyber security.

Australia and the UK have agreed to “increase deterrence by raising the costs for hostile state activity in cyberspace”, including by coordinating the two countries' cyber sanctions regimes.

The two countries also intend to “strengthen the resilience and response capabilities of countries in the Indo-Pacific region to malicious cyber activity via joint capacity building activity”.

"This will include tackling the increasing threat from ransomware through a joint initiative delivered in partnership with the United Nations Office on Drugs and Crime," the countries said, citing it as "a valuable step in helping the region to bring an end to criminal activity in cyberspace."

Other initiatives include developing an action plan to ensure global standards reflect Australian and UK priorities, interests and values, and advancing a 'women in cyber' agenda.

Payne said Australia is committed to working with global partners like the UK to “challenge malign actors who use technology to undermine freedom and democracy”.

“Australia and the UK share the goal that technology is used to uphold and protect liberal democratic values, and to benefit our societies, economies and national security,” she said.