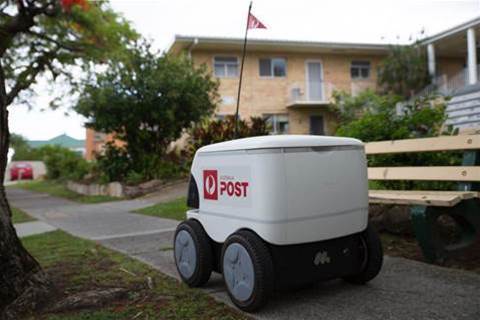 After Brisbane robot made over 100 deliveries.

Australia Post says it has “regulator support” to conduct more trials of robots to make last mile deliveries after a trial run in the Brisbane suburb of New Farm at the end of last year.

The postal service ran a four week trial in November 2017 whereby a robot the size of an esky on wheels re-delivered parcels instead of requiring the recipient to attend a post office.

AusPost called the project its “mobile parcel locker trial” and revealed in its annual report [pdf] that “over the four weeks of the trial we made more than 100 deliveries and the robot travelled 140 kilometres autonomously.”

“The opt-in, evening redelivery service received overwhelmingly positive responses from customers and the public alike who shared the footpath with the robot,” Australia Post said.

“Because it was the first extended trial of this technology in Australia, we were able to gather feedback from our customers about whether this solution could be useful and what they might be interested in seeing more of in the future.

“There were no technical or safety incidents during the trial and we have secured community and regulator support to keep exploring this technology.”