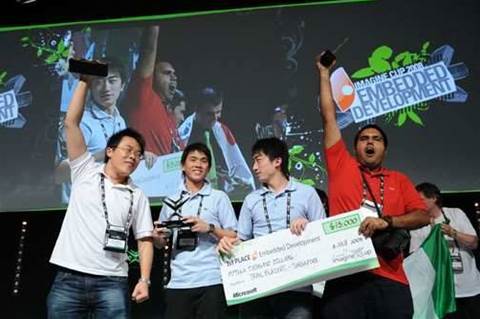 A group of Australian university students have triumphed over 200,000 students from 100 nations to achieve first place in Microsoft’s 2008 Imagine Cup competition.

The competition, which is now in its sixth year, is designed for students from around the world to showcase their talents and create an innovative solution to a real world problem.

The team designed a system for farmers to water their crops during times of drought and maximise production while still conserving water, in a response to the drought that has affected many rural areas of the country.

Team SOAK is not only the first Australian team to win the Imagine Cup -- they are also the first in the country to even advance to the final round of judging in Paris.

They won US$240,000 worth of prizes and now have the chance, along with five other finalists, to receive business and technology training from Microsoft and British Telecommuincations to turn their product into a commercially viable success.

The Imagine Cup title not only brings a level of prestige to the Australian IT community, but may also inspire future generations of Aussie science enthusiasts to pursue their dreams.

“They’ve really done a tremendous job in reaching the final, because best of the best are competing at that level,” said English.

“In their own way, they’re really helping Australia to showcase the excitement that a career in it can provide, which hopefully ignite an interest in it for many future students.”
Got a news tip for our journalists? Share it with us anonymously here.