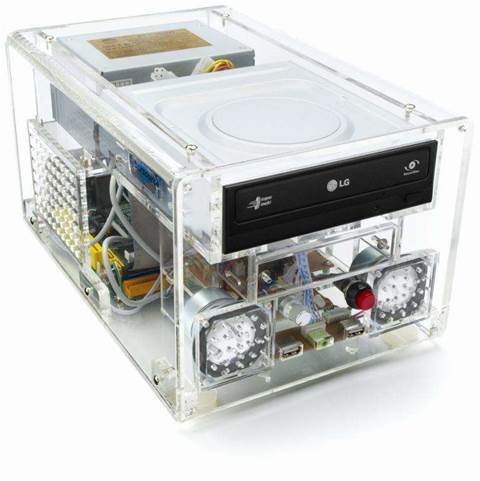 The Prison PC is an evolution of a safe internet computer developed by Cybersource four years ago.

The prison market became apparent after it was adapted for a project at the Metropolitan Remand Centre at Truganina, near Melbourne.

Prison PC is a centrally managed and distributed desktop environment. Desktops boot from a central server "but everything executes in local resources on the desktop", Fabre said.

Desktop PCs are assigned to ‘realms', such as the education centre or a cell block wing.

Each realm has a system image with the Ubuntu OS and necessary applications stored on a central server.

Images are loaded on PCs at boot and can't be modified by the prisoner. When the PC restarts, the system image is reloaded.

Desktops are kept in a custom, transparent case to allow components to cool without providing opportunities for prisoners to conceal contraband.

"Some prisons have to do this every month and employ people whose entire job is to review desktops," he said.

"Prison PC represents a huge cost reduction in this respect. They can review them by eye in seconds."

The first batch of Prison PC desktops were based on a VIA C7 processor, although Fabre said newer generations use Intel Atom 1.6 GHz chips.

There is no permanent data storage or drive in the chassis - prisoners are instead allocated partitioned storage on the central server.

The USB slots were designed to block thumb drives, USB modems or other devices from being operational if plugged in.

"Such items have been known to have been smuggled into or out of prisons, providing prisoners with a clandestine method of communication or access to non-approved media," Fabre said.

"Some prisons we know of have had problems with 3G modems being slingshot over a wall, plugged into a desktop and being used to contact victims."

Fabre said that Cybersource had "bites" from other Victorian prisons to roll out the system.

"We've also had discussions with 17 prisons in NSW, and nibbles from South Australia and New Zealand," he said.

The company has also fielded international interest in the product, including from Belgium.

It is also hoped that prisons will elect to stream online radio, IP and free-to-air TV, on-demand video such as for education, and even minority religious content using the system in the future.

Fabre said a benefit of this all-in-one approach is that custodians could deny or revoke rights to use parts of the system, without having to go to the cell and forcibly remove the kit as punishment.

"Custodial staff don't have to visit the cell and put themselves in a potentially hostile situation," Fabre said.