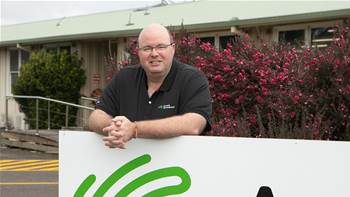 In a fourth-quarter update, the company said it now has 105 NBN PoIs connected either to its own fibre in metropolitan locations, or to 100Gbps wavelengths provided by Telstra in regional areas.

Most of the remaining PoIs will be connected this quarter, he said, which will show up in far reduced backhaul charges when the company reports its full-year results at the end of August.

The company is also continuing to expand the number of buildings it has fibre in, which managing director Phillip Britt said will present growth opportunities for the company’s business segment.

Aussie Broadband reported fourth-quarter growth across all its broadband business segments, with total broadband services up seven percent in the quarter to nearly 585,000, and 46 percent growth year-on-year.

The combination of subscriber growth and cost savings mean Aussie Broadband expects to report full-year EBITDA [earnings before interest, taxation, depreciation and amortisation] of $39 million, which Britt said is at the high end of previous guidance.

Britt said the subscriber growth was particularly satisfying given that residential broadband is “ultimately a churn market these days”.

Near- or at-cost offers are “definitely running hot and will continue to run hot into the first quarter," he said.

“You get your offer-hoppers that move around these different deals,” he added, noting that Aussie Broadband is questioning whether it wants to take part in that kind of competition in future.

Britt also offered a surprising insight during the update: Australia’s housing affordability crisis is starting to impact the broadband business.

Britt said a growing number of disconnections are occurring because the customer is giving up their residence.

“I’ve spent quite a lot of time in the call centre to understand what I’m hearing from the team”, Britt said.

In an industry often driven by churn between providers, “the most common reason [for disconnecting] is people losing their homes.”

He said he wasn’t able to quantify how housing is affecting Aussie Broadband’s business yet, because “it’s something we’re doing a deep dive on”, but said “it’s a surprisingly large number”.