An investigations officer at Queensland Health's Drugs of Dependency Unit has called for pharmacies to expand the drug classifications used in real-time reporting systems, in an effort to limit the growing trend of prescription drug addicts.

Rebecca Thompson, who investigates use of identity theft to obtain prescription drugs, said the prevalence of doctor shopping - addicts visiting multiple doctors to get multiple prescriptions for the same drug - was being exacerbated by a lack of real-time reporting between pharmacies.

"It is not illegal for a person to see multiple prescribers and obtain multiple prescriptions," she told attendees at the AusCERT 2012 conference on the Gold Coast this week.

"Because we don't have real-time reporting here yet, a person can actually go see three doctors in one day in an area, get three prescriptions and get them dispensed through pharmacies and nobody will know it's happened... until several weeks later when the data is finally lodged."

Despite an internal drive to establish the system, she said it was a "highly political" situation.

Attempts at implementing a real-time reporting system have been in tow for some time. The Queensland Government and Pharmacy Guild of Australia first developed a capable system requiring pharmacists to immediately report over-the-country sales of pseudoephedrine - used as a base ingredient in narcotics ice and speed - back in 2005.

The system gained $5.4 million Federal Government funding in 2007 to be rolled out nationally but rollout had failed to occur in some states including South Australia as late as last year.

According to Thompson, a capable system to track and appropriately deny sales of controlled prescription drugs including those based on oxycodone, fentanyl or benzodiazepine, had yet to be implemented. 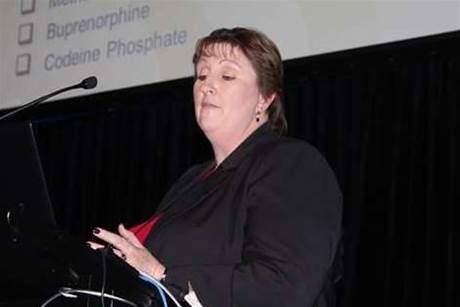 A January report [pdf] into overdoses found prescription drugs and alcohol accounted for the vast majority of the more than 21,000 ambulance call-outs in Melbourne during the 2010-2011 financial year.

Thompson pointed to 'doctor shopping', fossil pharming (use of the elderly to obtain scripts), falsified or stolen prescription pads, and theft of consumers' medical identity as the key tactics used by some prescription drug addicts.

The latter tactic had become the most prevalent in the US, with one survey cited by Thompson indicating up to 1.42 million citizens could be victims at any one time of identity theft for medical purposes, at an average cost of more than $20,000 each.

Such theft was made easier by the fact that users rarely reported the loss or theft of Medicare cards, often used to obtain such prescription drugs. Thompson said ambivalence toward medical identity theft meant a real-time system may not remove the issue.

The drugs agency has since attempted to minimise damage by educating doctors and establishing a system that notified guild member pharmacies of known, stolen prescription pads.

It had also issued alerts to state and territory law enforcement agencies, the Australian Federal Police and the Australian Crime Commission to curb cross-border fraud.