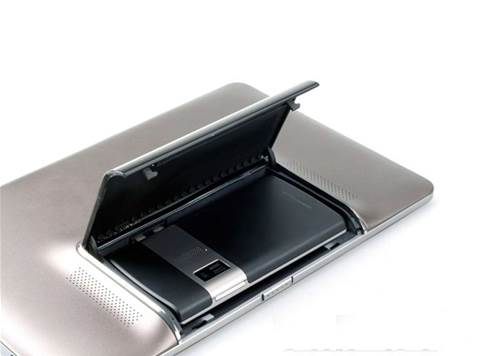 The Taiwanese computer giant surprises everyone at Computex with striking smartphone-tablet combo.

Asus has unveiled the Padfone, a striking new Android smartphone that can also be used as a tablet.

The 4.3in Android smartphone can be slotted into the back of its 10.1in tablet accessory – all of the apps and data on the phone can then be accessed on the tablet.

The tablet can't be used without the phone though, as it doesn't have a processor or any memory of its own.

Asus, a Taiwanese manufacturer better known for its EeePC range of netbooks, unveiled the remarkable new smartphone-tablet combo at the Computex trade show in Taipei.

The only Padfones actually on-show were non-operational dummies though and no details beyond the name and its basic appearance were officially announced.

It's probably safe to assume the Padfone will come equipped with Android Ice Cream Sandwich, the forthcoming version of Google's operating system designed for both tablets and smartphones, so a release date in the autumn seems likely.

It will be interesting to see how Asus markets the Padfone alongside its existing Android tablet-with-a-twist, the EeePad Transformer.