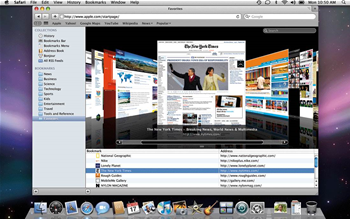 In the shadow of Monday's product rollout, Apple has packed a major security update into its Safari browser.

In addition to several new product features, the updated version of the browser contains some 51 vulnerability fixes for issues in both the Mac and Windows versions of Safari.

The update includes fixes for flaws which could allow for remote code execution, information disclosure and cross-site scripting attacks in both OS X and Windows systems.

The security fixes come as part of a larger update for Safari.

Many of the major enhancements, such as faster Javascript execution and new 'cover flow' history browsing feature, were unveiled by the company yesterday at its World Wide Developer Conference in San Francisco.

Sophos senior technology consultant Graham Cluley suggested that all users should update the browser not just for the features, but for the added protections in both the Mac and PC versions.

"In the past, some computer users have made the mistake of thinking that Apple's security updates for Safari are only relevant for Mac owners," Cluley wrote in a blog posting.

"But many of the fixes are also relevant to Safari users running Windows XP and Vista too."

Got a news tip for our journalists? Share it with us anonymously here.
Copyright ©v3.co.uk
Tags:
bothfixesmacsafarisecurityupdate