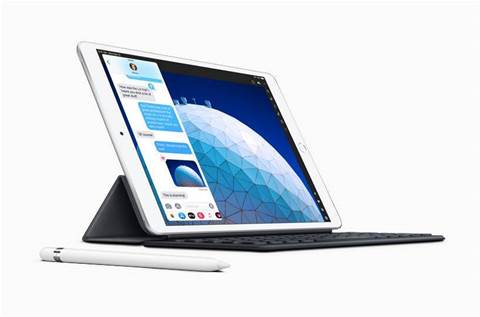 Apple has released new versions of its iPad range, revealing skinnier and faster models as the company looks to bolster the utility of the highly portable mid-sized device that isn’t quite a computer or a phone.

The iPad Air with a 10.5 inch screen gets thinner and has had its grunt boosted to run the A12 Bionic chip, a better True Tone display at a resolution of 2224×1668 and will be compatible with the Apple Pencil and will also have a smart keyboard made available.

The machine which is the closest to iPad’s original form factor, essentially steps into the gap left by the deletion of the 10.5 inch iPad Pro.

Apple appears to be relying on the better value and pricing to shift the souped-up machine with weight and girth loss marginal. The Air now drops to 6.1mm in thickness from 7.5mm and 456 grams from 469 grams, a net reduction of just 13 grams.

Commuter favourite the iPad mini finally gets its long-awaited spec upgrade and will also sport the A12 processor and be pencil compatible, the first major enhancement since 2015. Apple says iPad mini now delivers “three times the performance and nine times faster graphics”.

The machines are available from today.