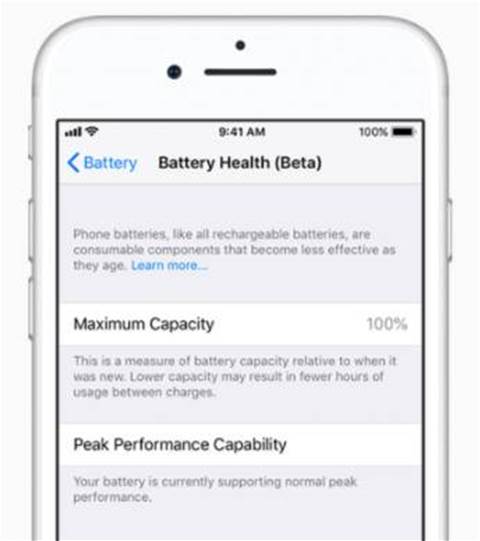 Over the weekend Apple let loose iOS 11.3, one of the biggest updates to the operating system since version 11 was released.

Apple has followed through on its promise to disable performance throttling on older iPhones with degraded batteries. The feature is currently listed as beta.

A new 'battery health' setting is located under 'battery' in the device's settings.

A device with what Apple considers to be a healthy battery will display a value for 'maximum capacity' - a "measure of battery capacity relative to when it was new", Apple said.

"Lower capacity may result in fewer hours of usage between charges."

There is also a new feature for 'peak performance capacity'.

Batteries deemed to be in low health will warn the user that "this iPhone has experienced an unexpected shutdown because the battery was unable to deliver the necessary peak power. Performance management has been applied to help prevent this from happening again".

There is an option to disable the performance management feature that has caused the company so much grief.

Apple last year was forced to apologise for slowing the performance of older iPhones and offer cheaper replacements for batteries as compensation.

The company said it had deliberately reduced power demands on older iPhones to "smooth out" power supply from batteries that are cold, old or low on charge, and to stop the devices from shutting down to prevent components getting fried.

It promised at the time to issue an iOS software update early in 2018 that would provide users more visibility on the health of their battery.

The AR framework debuted last year and is intended to take some of the headache out of developing AR applications.

The framework now includes image recognition capabilities that can "find and recognise the position of 2D images such as signs, posters and artwork", Apple said.

These images can then be integrated into AR experiences, such as "filling a museum with interactive exhibits or bringing a movie poster to life".

AR developers also now have the ability to place objects on vertical surfaces like walls and doors - previously this was limited to horizontal surfaces like tables and chairs.

Apple is boasting "50 percent greater resolution and auto-focus [support] for an even sharper perspective" through the device camera for AR experiences.

iOS 11.3 also brings with it a 'business chat' feature, allowing users to contact a business they have identified in Maps, Safari, search, or Siri using the Messages application.

The function allows for queries as well as payments using Apple Pay. It is only currently available in beta in the US.