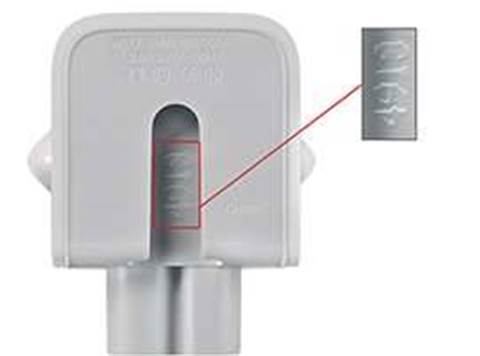 Affected adapters have a 4 or 5 character code on the inside slot. (Source: Apple)

Australia and NZ caught up in electrocution risk.

Apple is warning customers with Australian and New Zealand plugs for their wall power chargers to stop using them, as they can break and cause electric shocks if touched.

At least 12 cases worldwide of adaptors breaking, and the break leading to a shock, have been recorded by Apple.

The company has started a voluntary recall program that will see it exchange the antipodean adaptors, along with two-prong plugs used in Argentina, Brazil, continental Europe and South Korea, for re-designed equipment.

Plugs shipped with Apple Mac computers, iPads and iPhones between 2003 and 2015 are affected, the company said.

The Apple World Travel adapter kit also contains plugs that could break, and should be exchanged.