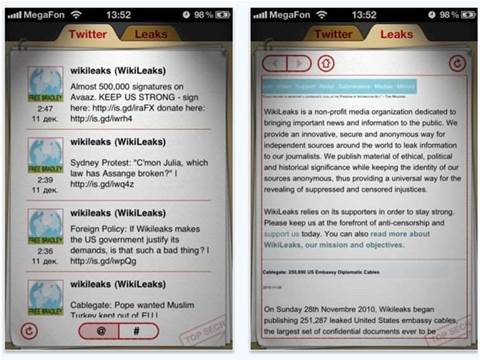 But was it much use anyway?

Apple has risked the wrath of Wikileaks supporters by removing an app for the contents of the whistle-blowing site's recent disclosures.

The app charged $1.99 for access to the embassy cable leaks, which are available for free from various sites around the web. It first appeared on the App Store on 17 December but is no longer available.

There's no word from Apple on why it took down the app, but the move could spark a reaction from the pro-Wikileaks hacktivists who have previously retaliated against sites and companies deemed to be acting against the organisation with denial of service attacks.

However, customer reviews suggest the takedown is no great loss, which was criticised for lack of content and depth.

Buyers had accused the app of being "just a wrapper for the mobile website.

“There is no access to the actual released documents and a Twitter feed doesn't count as up to date information," one user wrote on a Google cached version of the app info from before it was pulled.

Got a news tip for our journalists? Share it with us anonymously here.
Copyright © Alphr, Dennis Publishing
Tags:
app apple pulls software store wikileaks
By Stewart Mitchell
Dec 22 2010
8:56AM