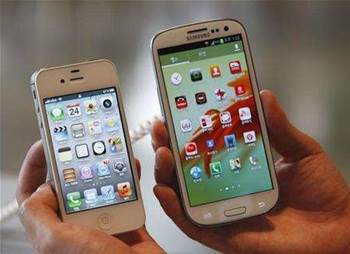 Foiled by US court.

Samsung Electronics did not willfully infringe on some of Apple's patents, a US federal court has ruled, foiling Apple's attempt to ratchet up the US$1.05 billion in damages it was awarded last August by a US jury.

The ruling removes a dark cloud hanging over Samsung, which, if the decision had gone the other way, could have been forced to pay triple the original judgment, or more than US$3 billion in the worst-case scenario for Samsung's balance sheet, according to analysts and patent experts.

As it stands, Samsung is forging ahead of its arch rival in the smartphone market that Apple virtually created with its first iPhone in 2007.

In December, the same US court denied Apple's request for a permanent injunction against Samsung's smartphones.

Tuesday's ruling overrules the jury's finding that Samsung acted "willfully" when it violated several of Apple's patents, a finding that could have formed the basis to triple the damages owed by Samsung.

"To the extent that Apple does address lost downstream sales, Apple discusses only Samsung's gains and makes no attempt to identify any specific losses Apple has suffered," US District Court Judge Lucy Koh wrote in her ruling.

Koh said the court could not enhance the damages "given that Apple has not clearly shown how it has in fact been undercompensated for the losses it has suffered due to Samsung's dilution of its trade dress," or, the look and feel of its products.

She said the jury, which had examined the case earlier and found that Samsung had copied critical features of the iPhone and iPad, had ample opportunity to compensate Apple for Samsung's use of its product designs.

Koh also denied requests from both Samsung and Apple for a new trial. Samsung had said a major patent verdict in favor of Apple should be overturned and Apple had sought a new trial to overturn some of the jury's findings and to try other issues on which the jury failed to rule.

The judge also denied Apple's motion for judgment that Samsung's Galaxy Tab 10.1 infringes a patent that relates to its iPad design. The jury earlier exonerated Samsung on the patent used to ban Galaxy Tab 10.1 sales.

Apple and Samsung are going toe-to-toe in a patent dispute that mirrors the struggle for industry supremacy between the two companies, which together control around half of worldwide smartphone sales that grew 43 percent in 2012 to 700 million units worth more than US$200 billion.

Since Apple first took Samsung to the court in early 2011, Apple has been more successful in its U.S. litigation campaign, winning the US$1.05 billion damage award and a pre-trial sales ban on some Samsung products.

Samsung has since fought back and scored some favourable rulings, including Tuesday's ruling that prevents any higher damages.

The ruling also comes as investors worry Apple is losing its dominance in consumer electronics after it missed Wall Street revenue forecasts for the third consecutive quarter last week on weaker-than-expected iPhone sales.

By comparison, Samsung, once seen as quick to copy the ideas of others, now sets the pace in innovation and widened its lead over Apple on the back of aggressive marketing of its wide product range last year.

Shares in Samsung, the world's top smartphone maker by units shipped, closed up 2.2 percent on Wednesday in Seoul, beating a 0.4 percent gain in the wider market .

The case in the U.S. District Court for the Northern District of California is Apple Inc. vs. Samsung Electronics Co Ltd et al, 11-1846. (Editing by Jeremy Laurence and Matt Driskill)