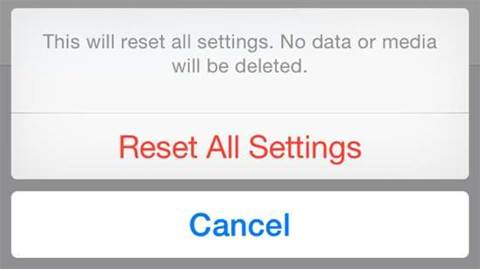 Apple's iCloud service dropped out for several hours this morning as the company dealt with claims that its "reset all settings" option in iOS 8 deletes iCloud Drive documents.

All iCloud services - which include mail, drive, web apps, contacts, calendar and back-up, among others - went offline for "some users" at around 8am Australian EST, according to the company's service status page, and appeared to be restored at around 10am.

The service issues come just hours after the discovery of a bug in Apple's new iOS 8 mobile operating system, which deletes all of a user's iWork documents stored in Apple's iCloud Drive when the 'reset all settings' option is selected from an iPad or iPhone.

Numerous users on the MacRumours forum from various countries last week began reporting that all iWork documents stored in iCloud Drive were disappearing when a user chose to reset their device, despite a pop-up assuring users that no data or media would be deleted.

The bug also appears to delete the iWork documents from other Apple devices connected to an iCloud account.

The 'reset all settings' option is designed only to restore the device back to its factory default status. A user's documents and files should only be deleted when the user selects the 'erase all content and settings' option.

"I had a bit of weird behaviour on my iPad, so I figured it wouldn't hurt to just reset all settings. For the hell of it, I did it on my iPhone as well," one user wrote.

"All documents lost! How on earth does resetting settings (with a clear notice that data will not be lost) wipe out iCloud drive? It's embarassing."

"I lost all of my documents in Pages across all of my devices as well as in iCloud. When I called Apple, they put me in 'troubleshooting' mode so their engineers could work on retrieving my documents," another wrote on the forum.

It's the latest in a string of security issues Apple has faced in recent weeks, which began with the brute-force attack on celebrity iCloud accounts resulting in the release of personal photographs.

Apple was also this week forced to release an urgent update to iOS 8 and apologise to users after a patch to the mobile operating system killed calls and the TouchID authentication service, while also dealing with negative publicity around the 'bendability' of its new iPhone 6 Plus.