One week of downtime.

Nearly all the services on Apple’s developer website remain offline a week after the consumer giant revealed the site had fallen victim to an external attack.

Fourteen of the site’s 15 services remain down after last Thursday’s attack. According to Apple’s system status page, developers are only currently able to access iTunes Connect.

A Turkish developer based in London earlier this week claimed credit for the attack and said he possessed details of over 100,000 registered developers.

Apple said at the time of the attack while personal information was encrypted and could not be accessed, it couldn’t rule out “the possibility that some developers’ names, mailing addresses and/or email addresses may have been accessed”.

It said it was working on overhauling its developer systems, update server software and rebuild its entire database to prevent further security threats. 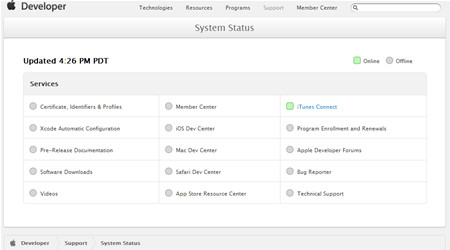 Apple's system status page as of this morning

Developers are preparing for the upcoming launch of Apple’s new iOS 7 operating system. A pre-release version has been released for developers but they are currently unable to access it due to the site outage. A further update to the pre-release was also expected this week.