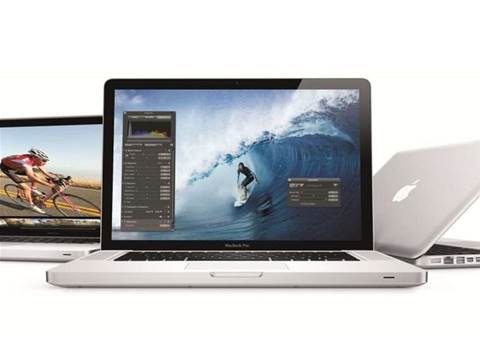 The MacBook Pro is the first device to use the new interconnect technology, which combines data transfers via PCI Express and displays using DisplayPort on a single dual-channel cable at 10Gbits/sec.

"All Thunderbolt technology devices share a common connector, and let individuals simply daisy-chain their devices one after another, connected by electrical or optical cables," Intel said.

Although DisplayPort offers bandwidth up to 17.28Gbits/sec, above Thunderbolt's 10Gbits/sec, that shouldn't be a problem with a single-monitor setup, as running a 1080p display at 60Hz demands just over 4Gbits/sec.

Intel said a host of tech manufacturers planned to use Thunderbolt in their products, including LaCie and Western Digital.

Apple claimed the new MacBook Pros are twice as fast as the previous line-up, thanks to Intel's Sandy Bridge processors. The 13-inch MacBook Pro runs Intel's Core i5 or i7 dual-core processors, while the 15-inch and 17-inch versions run quad-core i7 processors.

The new laptops will feature a built-in HD camera and be preloaded with Apple's FaceTime video-conferencing software.