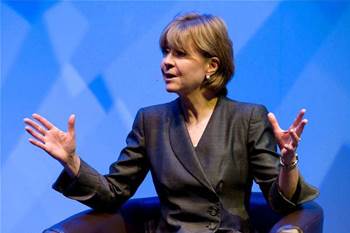 Search is on to find a replacement.

ANZ CIO Anne Weatherston will depart the bank next week, ANZ confirmed today, ending a three-year career with the company.

Group chief operating officer Alistair Currie will act as interim CIO while ANZ embarks on a global search for a permanent replacement.

“We have made very significant progress under Anne’s leadership by establishing a transformation roadmap for ANZ technology aligned to ANZ’s super regional strategy,” Currie said in a statement to the ASX.

"We are now increasingly taking an integrated approach to the group’s business transformation agenda across technology, shared services and operations. This is delivering more capability and better value for customers while driving significant productivity gains.”

Currie said Weatherston had achieved “a great deal” during her time at ANZ.

“I’d like to thank her for her contribution and wish her well with her future career.”

Weatherson joined ANZ as its CIO, accountable for the group’s technology and information security, in 2010.

During that time she led ANZ’s technology strategy, which aimed to build customer centricity from enterprise platforms across the bank’s consumer, wealth, commercial and institutional divisions - including its $1.5 billion ‘Banking on Australia’ transformation program.

Prior to her role at ANZ Weatherston served as CIO for the Bank of Ireland.