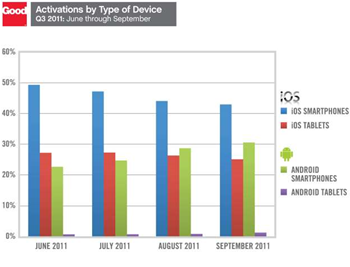 Put it down to consumer control.

Google has widened its grip on the enterprise market for smartphones in the past quarter with Android devices, grabbing another 6 percent share of new activations.

Android smartphones made up 39 percent of activations in the enterprise, according to Good Technology.

The figures do not indicate how many Android devices are being used, but clearly showed an acceleration in their move into the enterprise.

Exactly why that occurred was a matter of speculation.

"This is likely due to consumers holding back purchases of new iPhones in anticipation of Apple's latest release (the iPhone 4S)—as our reports indicate, consumers are setting the agenda for enterprise mobility."

Still, Apple maintained its dominance over smartphones which fell from 66 percent to 61 percent of new phone activations.

Tablets revealed an entirely different battle ground though, with Android tablets stagnating at around 4 per cent, up 0.9 per cent on the previous quarter.

The iPad on the other hand, backed by a host of applications that support key verticals, made up 96 percent of new tablet activations.

Good Technology’s report (PDF) did not include RIM devices or Windows Phone.