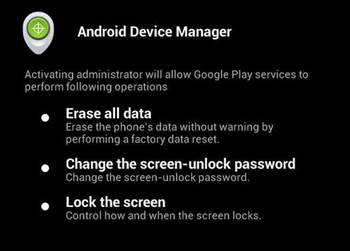 Pushed out via Google Play update.

The feature was comparable to Apple's Find My Phone app and has already been installed via a Google Play Services update. It was not expected to hit all phones until later this month.

The app worked on Android 2.2 Froyo platform and higher .

Android Product Manager Benjamin Poiesz said the app would allow users to make misplaced devices ring at maximum volume, tracked on a map or have their data wiped.

Got a news tip for our journalists? Share it with us anonymously here.
Copyright © SC Magazine, US edition
Tags:
androidgooglegoogle playmobilessecurity