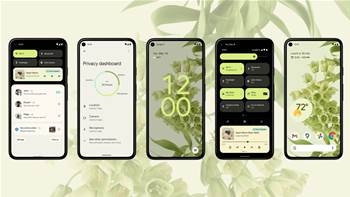 Google has made available at its I/O conference the first public beta of Android 12, codenamed 'Snow Cone', featuring what the tech giant says is the biggest design change in the mobile operating system's history.

Users will be able to completely customise their user interfaces with Android 12, Google said.

Google is also tightening up privacy controls and settings in Android 12, providing more transparency for users along with data security.

Among the new controls are a privacy dashboard, and microphone and camera indicators similar to what Apple introduced earlier in its iOS mobile operating system.

An app hibernation feature restricts what unused and forgotten programs can do and the user data they can access, and also force-stops them to reclaim memory, storage space and other resouces.

In Android 12, users can also select if they want to provide an approximate or precise location an app might request, for added safety.

Android developers can look forward to modernised enviroments, featuring the Jetpack Compose user interface toolkit that was announced two years ago, and the hardware, software and materials unified design kit, Material You,

Material You is aimed at devices with larger and foldable screens in particular, Google said.

Users are able try out the Android 12 beta on select devices from ASUS, Oppo, Xiaomi and ZTE and other vendors, as well as on Google's Pixel devices.