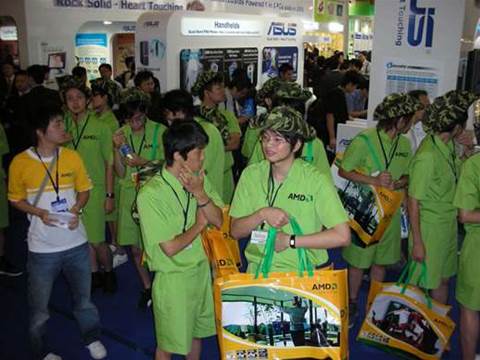 On a second quarter earnings conference call Thursday, AMD executives said the company's planned quad-core processor [based on what executives characterized as a new microarchitecture] will be demonstrated before the end of the year.

"We have a new microarchitecture under development and the first substantiation of that will be the quad-core to be launched in mid 2007," said Dirk Meyer, AMD's president and chief operating officer.

AMD has stressed that its quad-core design will be a "true quad-core," meaning it will contain four separate cores on a die.

Yesterday, during its own conference call, Intel re-iterated its plans to release a quad-core processor by the end of the year. Intel's version is expected to contain two dual-core processors packaged on a die.

Intel also plans release a two dual-core Core 2 Duo processors packaged together to create a similar product for the desktop market. That product is expected to be announced in Intel's Core 2 Duo kick-off on July 27.

In the meantime, AMD has plans to release a chip for the enthusiast market called the 4x4, which links two dual-core processors using AMD's fast hypertransport link to get quad-core like performance. AMD has said that product will ship by the holidays.

The server and enthusiast gaming are two markets that can take advantage of quad-core because software available is already multithreaded, Intel president and CEO Paul Otellini said during Intel's earnings call yesterday.

In some cases, executives said, AMD walked away from business when price points became so low the deal was deemed unprofitable.

Henri Richard, AMD's executive vice president of worldwide sales and marketing, said AMD would only take business that makes sense for the company. "We are not going to chase what I call lighting a cigarette in front of a gas leak," he said.

In the third-quarter, AMD believes it will do better than typical seasonality. While desktop remains troubled, executives said notebooks and server sales are robust and ASPs are stable.


Got a news tip for our journalists? Share it with us anonymously here.
Copyright © 2010 Network IT Week
Tags:
amd by demostrate end hardware pledges quadcore to true years