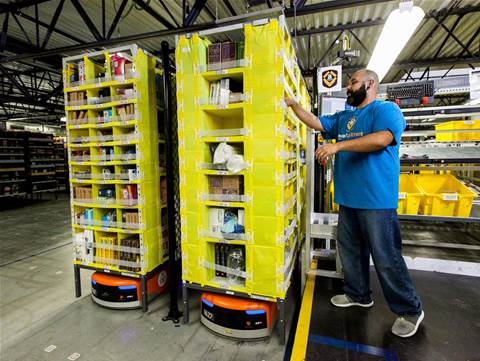 The eighth iteration of Amazon's US fulfillment centres - of which ten are in operation - use 15,000 Kiva robots along with the Robo-Stow robotic arm to shift inventory, and new vision and graphically-oriented systems for managing inventory and processing customer orders.

The Kiva robot is able to lift and move 1360kg of goods through Amazon's warehouses.

The floor-based robots are accompanied by the Robo-Stow - which Amazon claims is one of the world's largest robotic arms - used to shift large amounts of inventory.

Along with the robots, Amazon also introduced new vision systems that have cut down the hours it previously took to process received inventory to 30 minutes, as well as a graphical system for employees to help the robots fulfill orders.

“The Amazon fulfillment teams are dedicated to innovating in our fulfillment centers to increase speed of delivery while enabling greater local selection at lower costs for our customers," Dave Clark, Amazon’s senior vice president of worldwide operations and customer service, said in a statement.

"The advancements in our latest fulfillment centres hit all three of these customer desires while continuing to provide a work environment that is great for employees."

Amazon is also testing the regulatory waters for the use of drones to deliver parcels to its customers as part of its efforts to improve order processing.

Last year, Amazon chief executive Jeff Bezos revealed the 'Prime Air' plan to use small, unmanned aircraft that can fly at speeds of 80kph to deliver packages to customers in less than 30 minutes.

His company his currently seeking permission from US regulators to test the service in outdoor areas near Seattle where one of its teams is working on the technology.

Amazon is currently allowed to test drones indoors, at six sites designated by the US Government, and in other countries, but not however in its headquarters in the state of Washington.