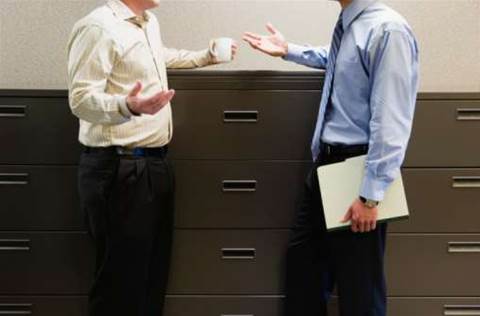 Data retention committee angry at being kept in the dark.

The Attorney-General's Department has been criticised by the parliamentary committee scrutinising the Government's data retention bill over its unwillingness to share details of the estimated cost of the scheme.

The cost of implementing and maintaining the data retention scheme has been a topic of contention to those involved. The Government has committed to contributing a portion of the cost, but is yet to provide a percentage or dollar figure.

PriceWaterhouseCoopers has been engaged by the Government to calculate the cost, but has not yet provided a final report, despite the bill having been before parliament for three months.

Appearing before the committee today, secretary of the Attorney-General's Department Chris Moraitis said the report was still a "work in progress".

He said he didn't have access to the information PwC had collected, but even if he did he wouldn't be able to provide it to the committee "because it is part of the cabinet deliberations".

"So to be honest with you we’re still waiting on the finalisation of that report to inform us of one, the quantum, and two, what reality the Commonwealth bears in terms of the Government’s commitment to reasonable coverage of capital costs."

AGD first assistant secretary Anna Harmer said the PwC report was being prepared specifically for government deliberations, and not for public consumption.

“It’s not a report that we anticipate being in a position to share ... the Government has reiterated on a number of occasions that it intends to make a reasonable contribution to the upfront capital costs of implementing data retention,” Harmer said.

“But it would be a matter for Government as to the timing of that decision and I’m not in a position to advise the committee as to when that might be.”

Harmer and Moraitis' responses drew fierce criticism from several committee members, including deputy chair Anthony Byrne, who described the AGD's failure to provide the committee with cost estimates as "unacceptable".

“If [the PwC estimates are not provided to the committee] there will be consequences," Byrne said.

Committee member and Shadow Communications Minister Jason Clare said the likes of ASIO and the AFP had provided confidential information to the committee and the department should do the same.

“That information which is not made public but is available to the committee is extremely useful to the members of this committee in providing the information we need to prepare our report,” Clare said.

“I don’t think there’s any disagreement around this table about how important this legislation is, and we’re trying to scrutinise it as best we can to make sure that we provide the best possible advice to the parliament and the Government.

"But a big part of this is how much does it cost. How much is it going to cost Australian taxpayers? If this committee is deprived of that information in that report, I think that that would be a mistake.”

Greens Senator Scott Ludlam has unsuccessfully attempted to force the government to table the PwC report into costs previously.

Telstra, Optus and Vodafone - those most affected by the planned scheme out of the 600-odd providers it will touch - have declined to comment on the cost burden it will place on their individual businesses.

Internet service provider iiNet has previously put the cost of the scheme at over $100 million in the first two years, which would be passed on to consumers.