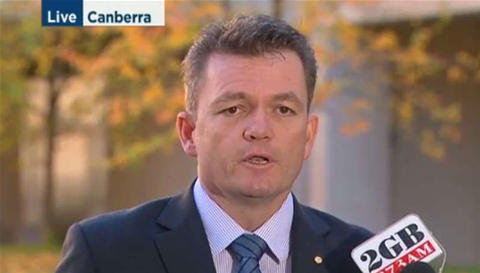 Labor angry over timing of investigation.

Police raided the office of Labor senator Stephen Conroy and the homes of two staffers for Opposition Communications Minister Jason Clare last night following a referral from NBN Co related to a series of leaked internal documents about the company's operations.

The Labor Party has claimed the timing of the raids - which came six months after the NBN's original complaint on December 9 - were politically motivated to damage Labor during the federal election campaign.

However, Colvin said the timing was "completely determined" by the AFP in line with the status and progress of the investigation.

"... not by any external factors and not by any government influence," Colvin said.

The federal government and the opposition were notified after the raids commenced yesterday, Colvin said. He confirmed an NBN staff member had accompanied police officers on the raids to help identify the documents.

The AFP is currently unable to access the seized documents, however, after the Labor party claimed they are covered by parliamentary privilege. Conroy sits on a Senate committee investigating the operation of the NBN.

The documents will now be lodged in the Senate and the parliament will decide whether to afford the files parliamentary privilege status. The AFP is also interviewing NBN staff about the leaked documents.

Shadow Attorney-General Mark Dreyfus said while he accepted Colvin's explanation, there were "serious questions" about why a government agency had "pursued the leaks in the way that it has" during an election campaign.

"What pressure did Mr Turnbull put on NBN Co to make this referral to the police?" Dreyfus asked this morning.

“What we need to know is, what did the PM or his ministers, or their staff, have to do with the commencement of this investigation and what do they know about that?

"The NBN Co is not independent. It is a government-owned enterprise. ... the NBN Co answers to the government."

Burke told ABC's 7.30 last night that the government had influenced NBN Co to act on the leaks where it hadn't taken similar steps in leaks of sensitive cabinet documents from the national security committee.

Prime Minister Malcolm Turnbull said the first he had heard of the NBN AFP investigation was yesterday after the raids commenced. He criticised the Labor Party for "attacking the integrity" of the AFP.

Four separate documents have leaked out of NBN since November last year.

In November and December, two separate leaked documents revealed NBN was considering overbuilding the degraded Optus HFC network, and that it is facing a remediation bill for Telstra's copper of ten times higher than it originally expected.