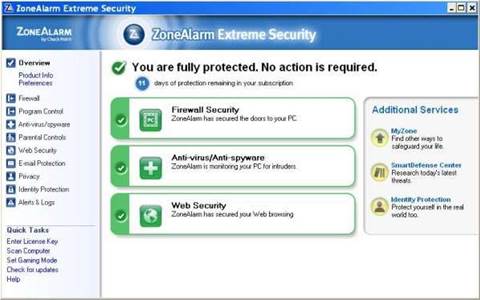 ZoneAlarm Extreme Security is Check Point's most extensive suite yet. It incorporates all the features of the ZoneAlarm Internet Security Suite with improved browser protection, PC tune-up tools and online backup. Although these latter components must be downloaded separately, it's clearly gunning for Norton 360.

You won't be surprised to learn, though, that the tune-up tools are pretty perfunctory: the standard package consists of nothing more than a Registry cleaner and defragmenter, which had no measurable impact on our system. If you want the rest of the modules, including a Startup Manager and Disk Cleanup tool, it costs extra.

That's so not "extreme".The online backup module is even less of a bargain. It's merely the free 2GB service provided by www.idrive.com, rebranded as a ZoneAlarm component. Not that there's anything wrong with IDrive, but if you're paying a premium price for a fully featured suite, you expect more than a bog-standard free service.

The last major "extreme" feature is the ForceField system, which launches your web browser in a virtualised environment to prevent malware from affecting your system.

It could be a valuable extra line of defence, but the implementation is ugly - protected browsers have an eerie green glow, and download requesters are hijacked by ZoneAlarm branding. And it doesn't work at all with Chrome or Safari.

Apart from that, ZoneAlarm Extreme Security is like the standard Internet Security Suite. The two share a clean but confusing front-end, and an admirably broad feature set, including parental controls and an identity protection module that warns you when personal information is being transmitted from your PC.

The firewall is a high point: we found it easy to make our test PC invisible to computers in the software's Internet Zone, while those in the Trusted Zone maintained full connectivity.

Unfortunately, Extreme Security also shares its brother's weaker points, including B-grade malware detection. In our test the file scanner spotted 92% of our threats, better than Eset's Smart Security but behind AVG.

And as a suite it's far from economical with system resources.

With a standard installation our test system took 39 seconds to boot, with CPU activity then continuing for 12 seconds for a total startup time of 51 seconds.

Memory usage was high too: after we'd installed the suite our Vista system ate up more than a gigabyte of RAM while initialising, and settled down to 810MB - easily this month's most cumbersome footprint. Our one relief was that installing the backup module added only around 20MB.

ZoneAlarm Extreme Security could have been a respectable all-round package, but we see no persuasive reason to shell out the extra dollars rather than sticking with the company's standard suite; and there are packages out there, such as the A-Listed Avira suite that do a better all-round job than either.