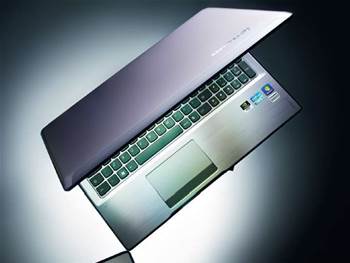 A well-built all-rounder and our new A-list laptop.

Lenovo’s IdeaPad Z570 hides its budget heritage well. Instead of the usual glossy plastics, Lenovo has employed brushed aluminium across the lid and wristrest to create a laptop that feels more luxurious than its $1329 price suggests.

The base is stout, and the lid does a great job of protecting the display. We had to prod firmly and deliberately on it before there was any sign of show-through on the panel itself. We’ve no doubt it will last on a commute.

Nor does that sturdy build come at the expense of hardware. Intel’s Core i5-2410M processor and 8GB of RAM keep the system feeling spritely, and Lenovo has managed to shoehorn a Blu-ray reader and dedicated Nvidia graphics into the budget.

Interestingly, though, Lenovo hasn’t opted for Nvidia’s Optimus technology, choosing instead to utilise the older Hybrid SLI. This isn’t necessarily a bad thing: where Optimus automatically switches between the Intel and Nvidia chipsets as it sees fit, the Z570 has you swapping chipsets at the flick of a switch, which you could argue gives you more control.

The Lenovo edges further ahead of its rivals thanks to its sensible, user-friendly features.

The hardware wireless switch is a welcome addition, as is the row of touch-sensitive buttons along the keyboard’s top edge; a tiny shortcut key that sits alongside the backlit power button launches CyberLink’s backup and recovery suite.

It all makes for a laptop that’s a pleasure to use. A swift dab of a finger adjusts the volume, mutes the speakers or cycles through the Lenovo’s display modes and fan-speed settings.

These features are useful: toggling the display’s movie mode slightly darkens the image – which we actually preferred to the default setting – and the fan control makes it possible to drop the speed right down in silent mode, or crank it up to full for gaming.

We could complain that squeezing in a numeric keypad leaves the Enter and right-Shift keys on the narrow side, but the keyboard’s scooped keys have such a crisp, precise feel that it’s a minor compromise.

The touchpad, too, is one of the best here: its wide, smooth surface delivering accurate cursor control.

In fact, there’s only one thing that the Lenovo lacks, and it’s USB 3. One of the four USB 2 ports doubles as an eSATA connection, and the handy card reader and 2-megapixel webcam come as some recompense, but those hankering after the latest external drives will have to look elsewhere.

That minor omission aside, Lenovo’s IdeaPad Z570 is tough to criticise for the money. The lack of USB 3 is the only major thing that gave us reason to pause, and when you consider that you’re getting a superb all-rounder with Blu-ray and switchable graphics for only $1329, it’s hard to be anything other than impressed.