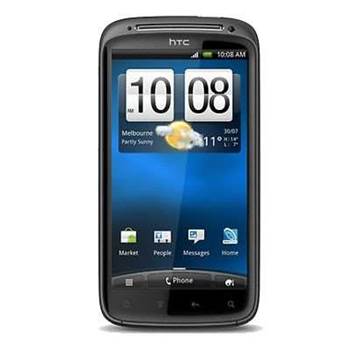 Highly anticipated but not quite a world beater.

The Sensation proudly shows HTC’s design pedigree, with a multi-textured rear case and a silver finish for the buttons and forward speaker.

The phone is a solid block of a unit. It weighs in at 148 grams, putting it into the heavyweight category compared to Samsung’s rather svelte Galaxy SII.

It’s also a bit thicker, hitting the 11-millimetre mark at the apex of its gently curved back. The solidity isn’t a negative – its gives a genuine perception of build quality, something that we felt was lacking on the otherwise excellent SII.

The screen is also rather impressive at 4.3 inches, with a 16:9 aspect ratio and a very sharp 540x960 resolution. The LCD is bright, although it does lose a little in terms of contrast when compared to an AMOLED screen.

The big drawcard of the Sensation is its dual core processor, which is a Qualcomm MSM8260 running at 1.2GHz. It’s been teamed up with the Adreno 220 GPU and 768MB of RAM.

There’s only 1GB of onboard memory, with HTC shipping an 8GB microSD card with the unit. This makes for a very zippy device in real world testing – games run smoothly, web browsing is fast and fluid and the overall feel is of a very slick device.

But real-world performance is slightly different story. While the ABC homepage loaded in 4.6 seconds, the Sensation took 6.354 seconds on our SunSpider JavaScript benchmark.

Looking at some other features, the Sensation has an eight-megapixel camera with 1080p recording for video at 30fps. The dual-LED flash is super bright and we were able to get detailed shots in all lighting conditions.

The battery also proved remarkably resilient, with a little under 50 percent still available after our 24 hour testing scenario.

The sense in Sensation

What does stand out in the Sensation is the Sense 3 UI. HTC’s proprietary interface has long been admired as a gold standard in Android overlays and version 3 manages to improve upon this.

The lock screen now features a metallic look ring rather than a swipe bar – you move the ring to unlock the phone.

There’s also room for four user-configurable app icons on the lock screen – drag the icon into the ring and the phone unlocks directly into that app. It’s a great feature for quick access to applications such as mail, messaging, the camera or even plain old dialing functionality for the old school.

You can also set a widget such as Friend Stream or Weather to be active on the lock screen.

Sense 3 also features some more subtle changes such as DLNA connectivity via the Connected Media app and 3D animated scrolling between home screens, without changing any of the popular functionality such as helicopter view.

Overall, while the hardware seems to pack less of a punch than one would expect, the experience of using the HTC Sensation is still a very positive one, largely thanks to the Sense UI.

Pricing wise, the Sensation is on Telstra for $0 on the $79 plan, or outright for $792. This makes it a little cheaper than the launch RRP of our A-Listed Samsung Galaxy SII.

Ultimately, choosing the Sensation over any other dual-core phone will be a personal choice, with Sense and screen being a major drawcard for many users.