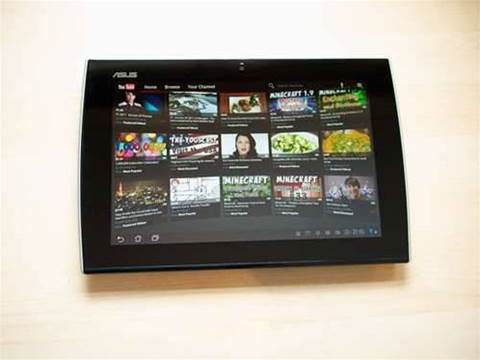 An Android device that's neither tablet nor netbook.

Those crazy kids at ASUS. While every other manufacturer is chasing Apple’s iPad with what the lawyers are calling ‘slavish copies’, they’re off doing something different with Android slates.

First there was the innovative dock of the Eee Pad Transformer, now it’s the all-in-one Slider’s turn to give tablet owners what they’re all secretly craving: a keyboard.

The keyboard itself is curiously comfortable. The keys are small, but they’re so well built and spaced out that the feeling you’ve slipped back into using a late 90s personal organiser is soon shaken off - surprisingly quickly, in fact. Most

of this review was written on the Slider, at a typing speed almost equal to a full size ‘board.

The keyboard isn’t just for writing on. The large hinge which flicks up at the back also props the screen up at a fixed angle for viewing too.

It’s a beautifully well made mechanism, absolutely rigid and locked into place with magnets, it turns your knees into a solid impromptu desk.

Lots of ways to connect

With microSD, microHDMI, headphone/mic and a full sized USB port, the only thing that’s missing from the Slider’s repertoire of connections is a proper SD card reader. That’ll disappoint photographers, especially with Android’s decent RAW camera apps, but those who want to connect a USB mouse or games controller will be pleased that the Slider supports them as standard.

Connecting to a TV via the microHDMI means you do your Nvidia Tegra-based gaming on the big screen, too.

The screen is almost identical to the Transformer, which means it’s a gloriously rich IPS panel with vibrant colours and wide viewing angles. The best thing about it, though, is the physical finish. Its near frictionless surface will smooth the passage of the stickiest fingers.

Better for typing than reading

The drawback, of course, is the size and weight of the Slider. With the keyboard out, it’s an awesome device.

But as a pure tablet it’s double the width of most rivals and too heavy to comfortably hold one handed in a portrait position for long. So if you see yourself using a tablet mainly for reading magazines or PDFs, it’s not the one for you.

iCloud is great for keeping all your Apple products up to date with file versions and libraries. But ASUS has long included WebSync with its tablets. That’s 5GB of free space that appears as a hard drive on any tablet or PC, and the beauty of Android is that any service works with any app.

The Slider’s built in keyboard is indescribably more convenient than carrying a Bluetooth one around with you, even if it adds the same weight. It uses no battery power, and provides the tablet with crucial support too. As a result, for Tweeting in front of the TV, taking notes in a lecture, or trying to work on a crowded train, the Slider is a fantastically well designed device.

But ASUS’ own Transformer is cheaper than the Slider, has more USB hubs and an SD card reader to boot. And although the Slider is lighter overall and the keyboard is more compact, the crucial thing is that if you want the pure tablet experience you can simply undock the Transformer’s screen.

For that reason, the Transformer remains our favourite Android tablet. But the Slider, the Slider is something else.

This article originally appeared at Stuff.tv