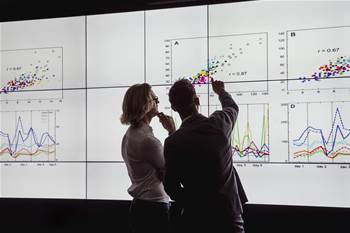 How to respond to ‘seismic’ technology change.

Against a backdrop of ‘seismic’ technological innovations brought about by the fourth industrial revolution, business survival will depend on their capacity to adapt to a world of rapidly accelerating change.

So says renowned futurologist, Industry Professor Rocky Scopelliti, who is set to deliver his research findings in a keynote address at the upcoming NEC Immersion Conference, Celebrating the Game Changers: The Next in Creating Value.

The technologies of the fourth industrial revolution - characterised by the convergence of new energy, logistics, and communication systems - have created what Scopelliti refers to as a "New Economic Physics", where the marginal costs of supply and demand are reduced to virtually zero, delivering accelerated scales that linear-based models simply cannot achieve.

Traditional value creation systems have become decoupled from their relationship to growth, supply, and access to scarce resources, through dematerialisation, disaggregation, and disintermediation, evidenced by the growth of business models set to rule this decade – such as the crowd economy, the free data economy, closed loop economies and on-demand services such as Amazon, Google, Uber and Airbnb just to name a few.

Combined with innovations in artificial intelligence and quantum computing, organisations have the capacity to analyse data at scales previously unimaginable, creating an exponential curve in technology not seen in previous industrial revolutions.

Adapting to these challenges requires business model reinvention and data literacy, key components not just of organisational success, but of survival.

In his upcoming keynote address, the futurologist will discuss why enterprises should move away from linear thinking towards a more exponential understanding of the world, there environment this coming decade and how to achieve business growth.

Australian businesses were relatively late to the 'data party', Scopelliti says. “Rather they’ve focused on traditional business models that are labour and capital intensive and data light, we need to flip that around to models that are data intensive, capital light, and automated”.

Organisations must learn that success in this decade will depend upon their ability to compete analytically – Scopelliti predicts that will be especially true in the technology, financial services, retail banking, media and entertainment, insurance and retail sectors. Achieving this requires a sophisticated understanding of their information assets, including not just customer data, but also the knowledge and skills capabilities of staff, contractors, and partners. Compiling these inventories requires greater data science literacy across organisational structures, meaning companies will need to recruit both staff and executives with the ability, knowledge, and vision to help execute this transformation.

But while companies in the ASX 100 can afford to recruit those skills and experience from overseas, where does that leave small and medium size enterprises? “A localised skill shortage is causing a discord between organisations and industries that is going to manifest over the coming years,” the professor says.

Organisations will need to work collaboratively with industry, academia, and institutions like UTS that have developed AI driven skills-matching platforms that augment data-driven decisions on workforce planning, development and redeployment in order to skill-up, move, and adapt workforces to ensure they can compete in a radically shifting professional landscape.

“I often remind many boards and leadership teams that we are seeing the greatest intergenerational change in our workforces and leadership across all facets of society,” says Scopelliti. In this coming decade the proportion of younger people in the workplace will far surpass those at the top end of the age bracket.

“They have completely different views about the world, about organisations and their role in society, and how they prefer to work.” For organisations for whom labour is an important component of value creation, paying attention to demographic shifts “must be the highest priority”. Almost half of younger workers such as Millennials (broadly 20 - 39 years) prefer to work for themselves than as an employee, putting pressure on the competition for labour in a limited skills environment.

“When we think about organisational success, in the 1920’s, the average life of a Fortune 500 company was about 65 years,” says Scopelliti. “In the 2000s that had declined to 15 years. Over this coming decade, I predict that lifespan will decrease to single digits. We are operating in a world of accelerated change that is going to come at us at paces and rates that we've not experienced before. It's going to be the capacity of an organisation to adapt to that environment, which will define its success in the future.”

Reserve a front-row seat to Scopelliti’s game-changing keynote at NEC’s Immersion online conference for planning advice, thought-leadership, and practical next steps enterprises can use to achieve success in the Fourth Industrial Revolution.