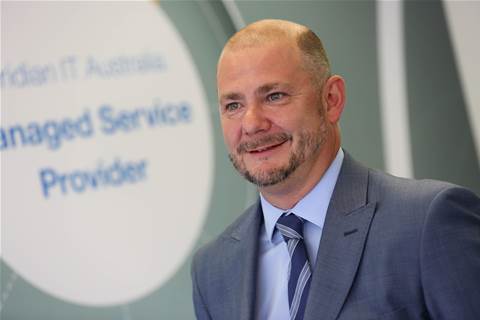 Steve White understands well the challenges IT teams have in supporting businesses to move digital projects quickly. That’s because he is managing director of Meridian IT, which for more than two decades has provided computing services to organisations.

White says the pandemic has highlighted problems with the way IT teams procure infrastructure. So he is urging them to rethink their approach to this. We asked him about the key challenges and opportunities.

What problems do you see with the way IT teams support digital initiatives?

We've been doing traditional IT infrastructure for shy of 30 years. The story has always been similar: customers buy hardware, putting it in a data centre that they've scoped based on business and user requirements for today. In three years’ time it gets refreshed with the latest and greatest and they have a lot more capacity, because they’ve realised over the last three years their business has grown and so has their data needs – exponentially.

The pandemic has fast-tracked this. Customers are now looking for new ways to procure. We saw customers saying, ‘I need to be able to ramp up my infrastructure, whether it be storage or compute, I need more data space, I need to be able to get to things faster – but I don't have the infrastructure’. So they have been having to bolt on computing hardware to get them through.

If they are still very old school when it comes how they buy their compute and their storage, this doesn't give them the ability to be agile (or digitally fit enough) [computing resources] to address unforeseen or impromptu digital departmental requirements – whatever they might be.

We also had customers that knew that they had to upgrade their systems during the pandemic, but the only way they could do it was physically. They were relying on the supply chain to be able to deliver the physical boxes that they needed. Then we had the issue of having engineers come on site and do the implementation for them. We weren't allowed to go to a number of customers on prem, but in some cases, we were allowed to go to the data centres. This enabled developers to do upgrades for clients that otherwise wouldn't have been possible.

I think this pandemic has certainly been an eye opener for a lot of people. What it’s done is disrupted customers and staff’s thinking, that there’s got to be a better way to procure.

Do you think public cloud has been an effective solution?

We saw this mad dash to public cloud when the AWSs and the Googles and the Microsofts came out. And everyone at that point said ‘traditional infrastructure is now dead. If you're a reseller in the market that just sells infrastructure you won’t be around in the next two to three years.’ Well, guess what, we're still here, and we're still doing well. Why? Public cloud is great for certain requirements. However, in todays’ (pandemic) working ecosystem, custodians of data want more control.

Why do IT departments need to do something about this?

If technology doesn’t have the ability to scale that's where I think the frustration lies, with the business units saying, ‘There’s no point talking to IT. They can't help us with the current systems in place. We need to do this quickly. What's the alternative?’ They're going off on their own tangent and working out ways to do it and not involving IT.

That’s where IT lose control. Ease of access, consumption and the credit card has meant marketing, sales and other departments can go to public cloud and bang, they can spin up what they need. And IT is still not aware that they've done it, often causing bigger issues. For example, from a regulations perspective, having data sitting in the public cloud that is not approved to be there. So you have security and compliance issues.

What can IT teams do about this?

If IT were thinking differently and procuring differently, they’ll be able to meet those needs if someone says ‘The state's in lockdown. We need this done in 48 hours so as to ensure internal BAU and happy customers.’ And I think with traditional IT you couldn't do that. The new way of procuring will allow customers to do this a lot better.

What we're going to be leading with in the market is around consumption models for computing and storage. Customers will still engage in public cloud, no doubt about it, it makes financial and technical sense in specific circumstances. But a lot of the core infrastructure we are seeing coming back on premise!

Data driven insights have meant customers are now thinking differently. They are seeing the benefits of public and private cloud – when their data is managed smartly across both. Having commercial options such as consumption models has meant speed and scale to procurement – let alone happy finance departments with no capex budgeting.

If they do it under a consumption type model, it sits under their opex budget. We just send them a bill every month, just like public cloud. Here's your baseline for what you've used and if you go above that, is that there's the invoice for that. It gives them more control than what they do today with public cloud and it’s significantly cheaper.

That, to me, is what agility around traditional infrastructure needs. And that's something that we're certainly going to be leading with our new service models, in conjunction with our strategic partners.

How are technology providers responding?

IBM, one of our key partners, have been doing this for a long time with UNIX systems. You can buy infrastructure and only pay for the infrastructure that you’re using. At any given time, you can turn on dark capacity and burst up and down. And I think that's going to be the new norm, especially for us and for our clients over the next 12-18 months and possibly beyond.

How does this support better use of data?

Transformation is just a smarter way of aggregating data – rather than operating in silos, we’re aggregating it, and we’re utilising it and we're optimising it. And that's been one of the key drivers for us in terms of our go to market, moving away from that traditional vendor to a consumption model.

Being able to manage data correctly provides organisations with agility and speed to market. And in a time of crisis, speed to market and speed to change is absolutely fundamental. Having quality data, through good management (see our work with Fairfield City Council), provides you that ability to do that. Speed becomes the new scale, the new innovation and the new success to growth.