Sydney Water pours 4.5 percent of IT budget into website 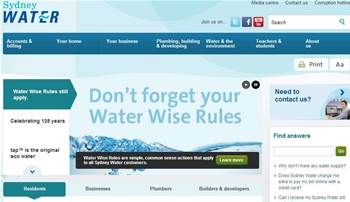 Splashes out $7 million, comes in 'under budget'.

Sydney Water spent 4.5 percent of its IT budget over three years on the development of a new website, according to NSW Finance Minister Greg Pearce.

The new site went live in March this year.

In response to Opposition questions in state parliament in May, Pearce today revealed what the preparation and design of the website had cost in percentage — but not in dollar — terms.

Sydney Water managing director Kevin Young put the figure at $7.1 million. He said the implementation of the new website had followed a “rigorous market tender process” which “nearly halved the original market estimates”.

He said the cost was 42 percent lower than quotes received during the tender process.

“The website came in $0.7 million under budget,” Young said in a statement.

It wasn't immediately clear what number Minister Pearce had based the 4.5 percent figure on.

Sydney Water declined to provide the total figure of its IT budget for the three years past, which according to Pearce’s comments would put it at around $155 million.

Clarification is being sought from Sydney Water and the Minister's office.

Pearce also revealed 1.3 percent of Sydney Water’s annual IT budget was used for ongoing operational costs for the website. In the NSW budget for 2013-14, Sydney Water was allocated $56 million for information technology projects.

The utility said it had processed 138,995 online payments totalling over $35 million since the new website launched.

It said since March that the site had received 1.26 million impressions and around 83,000 unique visitors a month.