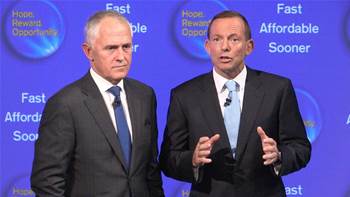 Prime Minister-elect Tony Abbott has confirmed Malcolm Turnbull will be the government's new Communications Minister, taking on responsibility for the country’s technology strategy as well as its biggest ever infrastructure project, the national broadband network.

During his three-year tenure as Shadow Communications Minister, Turnbull has taken on the NBN as his pet subject and managed to turn the Coalition, and most notably Abbott, from a ‘rip out the NBN' approach to one more closely aligned with the Labor Party.

Tony Abbott famously ordered Turnbull to “destroy” the NBN when he brought Turnbull back onto his frontbench as shadow communications minister in 2010.

Over the past three years, under Turnbull’s guidance, the Coalition has reverted to advocating a lower-cost fibre-to-the-node NBN.

Turnbull’s NBN would run fibre to around 60,000 street-level cabinets and use copper wires or wireless connections from the street to the home.

Turnbull looks unlikely to be moved on his party's policy, despite a 200,000 strong online petition launched two weeks ago attempting to persuade the minister to retain the FTTP model. He said late last week the Australian public had voted for the Coalition and with that its NBN policy.

Despite a quietly released and rapidly withdrawn policy revealed in the dying days of the election campaign, Turnbull has promised not introduce a default filter on internet and smartphone networks.

The filtering policy was released by Liberal MP Paul Fletcher, without the approval of the Shadow Communications Minister, and was pulled just hours later, with Turnbull announcing it was a mistake.

Abbott today announced Fletcher had been appointed the new parliamentary secretary for the Communications portfolio.

Read on for details on Australia's other new IT leaders.

Abbott's choice for IT-related portfolios remained relatively unchanged from his shadow ministry, aside from one significant alteration to the Finance department.

Abbott denied claims Sinodinos was switched out of the post at the last minute because of the possibility he could be called to appear before the NSW Independent Commission Against Corruption.

“I would not be appointing Arthur Sinodinos to my outer ministry if there was any cloud over him,” he said.

Ultimate responsibility for government ICT is likely to remain split between Cormann and Howard-era parliamentary secretary Michael Ronaldson, who will become the Coalition’s special minister of state.

Technology procurement functions, which are headed up by government CTO John Sheridan, will remain within the Finance remit, while the strategic outlook of AGIMO will be under the oversight of Ronaldson.

The Coalition has already indicated it will adopt a stricter approach to agency management of ICT to what it described as the past government’s “timidity and passivity” in its own tech policy document.

Prior to the election a spokesperson told iTnews the Coalition would step up the government’s internal cloud policy to a ‘cloud-first’ approach to procurement. It also plans to split agencies into two groups based on their annual ICT investment, with heavy users to maintain autonomy of their technology operations but smaller agencies required to adopt cloud solutions more appropriate to their scale.

Marise Payne will take over the technology-heavy Human Services portfolio.

Long-running Shadow Attorney-General George Brandis will retain his position in the new Government.

Brandis will be tasked with guiding the Government through new changes to the Privacy Act 2012, which will come into effect in March 2014.

The Coalition, led by Brandis, is also expected to study the case for a mandatory data breach notification scheme. A bill was proposed under the former government but failed to be heard on the last day of Senate sitting before the federal election.

The Coalition has not expressed support for the bill in its current form, but is understood to believe in the concept of mandatory data breach notifications in principle. It is expected to study the case for such a scheme to accompany the introduction of the new privacy reforms.

What about Science and Innovation?

Macfarlane has previously served as minister for Industry, Tourism and Resources under the Howard government. He has also served in the shadow portfolios of Trade, and Infrastructure and Water, and most recently was shadow minister for Energy and Resources.

Sophie Mirabella, who most recently served as shadow minister for Innovation, Industry and Science, withdrew herself from consideration for a cabinet position as she battles to retain her seat of Indi.

In the previous government both Science and innovation portfolios were situated in the Department of Industry, Innovation, Climate Change, Science, Research and Tertiary Education, under former minister Anthony Albanese.

It is not yet clear where responsibility for Innovation will sit, though Abbott said the order of business for each portfolio would be clearer after the swearing in ceremony.