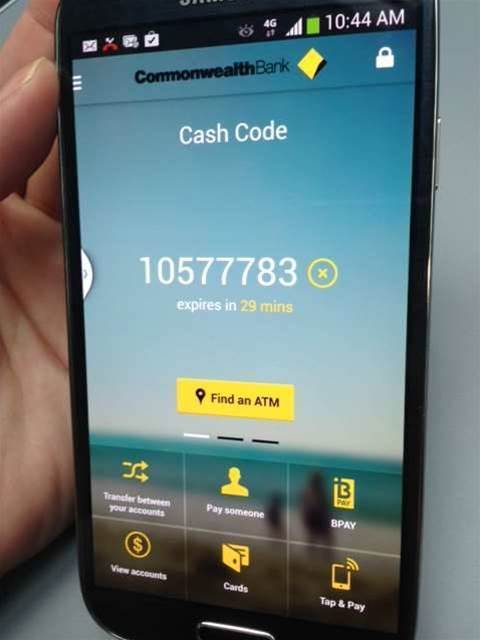 Commonwealth Bank customers will be able to withdraw cash from ATMs via the bank’s mobile application from next month.

‘Cardless cash’, an initiative CommBank claims is an Australian first, will allow customers or their designated representatives to withdraw up to $200 per day from any of CommBank's 3000 ATMS.

The feature is limited to one transaction a day. Users log on to the application, select how much to withdraw from which account and are then issued two numbers: an 8-digit code will appear on the home screen of the app; and a 4-digit PIN will be sent via text to the user’s mobile phone.

Users can then enter the codes at participating ATMs under a ‘withdraw cardless cash’ option to retrieve the cash.

Customers can also appoint someone else to collect the cash on their behalf - in that instance the user will be prompted to share the 8-digit code via SMS within the app to the nominated person, while CommBank will send the PIN directly to the receiver’s mobile phone.

The bank also today introduced a new ‘lock and limit feature’ to its mobile app, which allows CommBank credit card customers to control in more detail the type of transactions they allow on their cards.

It allows customers to block in-store international transactions on their credit cards when they are not overseas, to block ATM cash withdrawals and to set a transaction spending limit. The lock settings also offer a timed feature to turn certain types of transactions on and off to a schedule.

The lock and limit feature will be available for the Android and iOS versions of the app from May. It is currently limited to credit cards only, but the bank said depending on its success it could be expanded to include debit cards.

The features are the latest efforts in CommBank’s aggressive push into the mobile space.

It also gave customers lacking NFC capabilties in their iOS or Android smartphpones pay tags for $2.99 - an attachable sticker to sit on the back of the smartphone which can be used for payments up to $100.

Still no launch date for Albert

The long-awaited launch of CommBank’s tablet solution Albert is no closer to arriving after the bank today declined to provide a firm launch date.

Albert facilitates transactions anywhere in a retail store via an encrypted EMV pinpad connected via wifi or Bluetooth.

Albert has remained in testing since the announcement, due to what the bank said last year was unexpected complexity with the build process.

It said in October it expected to launch the product “very soon”, a forecast it repeated today.

CommBank CIO Michael Harte said the 7in touchscreen, custom-built Android PoS device needed to undergo numerous tests before the bank could release it to the market.

“We have to do a physical drop test. We have to throw it on the floor 20 times to make sure it doesn’t smash. We have to make sure it had a glass surface that can’t be read by anybody else, because we’re entering a PIN number. And there’s a whole host of other things we need to do to bring this to market,” he said.

“And like adoption rates we’re seeing with our applications, we’re pretty confident from feedback from the market that the uptake will be similar.”