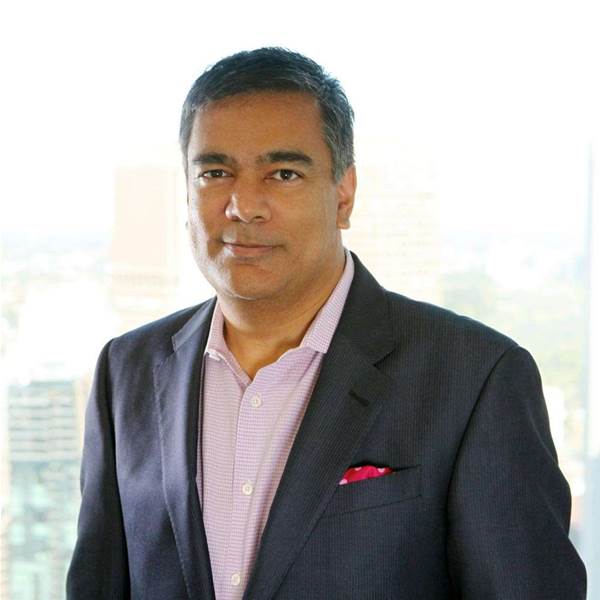 In some ways, it’s the victim of its own industry’s success, with 83 percent of Australian households connected to the internet as of 2013, according to the Australian Bureau of Statistics' most recent figures.

Digital players like Viber, Skype and Facebook have, in many cases, replaced traditional phone calls and SMS.

And consumers take connectivity for granted: while they are more reliant on digital services than ever, the means by which they get to those services has become largely irrelevant.

So telco profit margins are shrinking.

“There’s a bit of a diseconomy of scale that is at play,” Telstra CTO Vish Nandlall explained to iTnews. “[Consumers’] willingness to pay is going down, while consumption is going up.

“So the question is one of value: How can I create greater value across the delivery of those bits, so we can have more of a growth profile versus the current trajectory, which is a utility profile?”

Over the years, Telstra has branched out beyond traditional telecommunications into providing services like security, marketing and cloud for businesses, and entertainment and telehealth for consumers.

Many of those services are provided in conjunction with business partners like Medgate, Seven West Media, and SNP Security.

Nandlall wants to take Telstra’s partnerships a step further, describing a “platform-based” business model that would open up more of the telco’s capabilities to third parties.

“If I look at what a traditional telco offered – let’s say it was voice – everything was pretty much vertically integrated from the voice application all the way down to the distribution to the consumer premises,” Nandlall said.

At the moment, none of those capabilities are currently exposed in a way that allows third parties to access them, Nandlall said.

“We’re not really set up for third parties to leverage our basic DNA of services," he said.

“So the question is, how do you make those platforms, and how do you create the correct business model that engages partners so that we can become part of those new ecosystems and participate in their growth?

“That’s really the transformation that has to happen for a lot of telco players and indeed that’s what Telstra’s journey is going to be over the next five to 10 years.”

Telcos around the world have been trying to figure out what to do about over-the-top (OTT), digital players like Skype, Viber and WhatsApp, which have been winning smartphone users away from traditional telephony for some time.

In 2012, analyst firm Ovum forecast OTT VoIP providers to cost telcos a total of US$479 billion globally in the eight years to 2020.

An EY telco industry report last year suggested a range of strategies including having telcos compete directly with digital disruptors by aggressively throttling OTT services and creating their own apps in-house.

Alternatively, telcos could choose to partner with digital players by, for example, bundling certain OTT services with their data packages, EY suggested.

That’s where Telstra and its largest competitor, Optus, have diverged.

Optus’ parent company SingTel made waves last year when CEO Chua Sock Koong said telcos should be allowed to charge OTT players for providing the rival services over their networks.

Singapore’s communications regulator responded by stating that telcos should not restrict or block consumers’ access to OTT services.

Telstra has no such plans as far as video streaming is concerned, choosing instead to offer free six-month subscriptions to Presto and Stan to new home broadband subscribers.

Telstra has a stake in Presto via its pay-tv subsidiary Foxtel, but Stan is a competitor.

“There is a binary view of ‘everybody is a competitor and I’ve got to compete at scale with them each’, which I think is the wrong way to look at it,” Nandlall said.

“I think it’s more that there’s ecosystems that need to be formed in each of those areas. We need to ask 'how do I participate in those ecosystems'?.

“If I look at something like the internet of things, is Telstra going to create all those applications, and serve every niche? It’s obviously intractable for us to do that.

"The question is then, do we have the platforms so that a partner could come in and do that and be able to leverage a business that allows them to sell to residential consumers and industrial pro-sumers?”

Telstra’s global head of OTT Will Hughs outlined its view of OTT partnerships in a blog post early last year.

Hughs said partnerships would give customers a better experience by optimising how OTT applications ran on its network – for example, by increasing network bandwidth for music and video streaming services.

That would in turn benefit OTT players by boosting subscription rates, revenue and brand loyalty.

Meanwhile, Telstra would benefit from access to more customer data – for example, whether users accessed online shopping or gaming apps – and tailor their marketing efforts accordingly.

From a technical perspective, Nandlall highlighted software-defined networks and network functions virtualisation as technologies that would allow Telstra to “actually participate in the delivery of applications”.

Telstra branched out into a diverse range of businesses under former CEO David Thodey, from buying video streaming platform Ooyala in mid-2014, to partnering with healthcare provider Medgate for its upcoming telehealth service, ReadyCare.

The telco giant has also bought six percent stakes in about 20 start-ups through its incubator, Muru-D.

Nandlall compared Telstra’s diverse business interests with Google, which is involved in everything from search to wearable technology to self-driving cars.

“Google’s main core business is selling ad inventory,” he said. “Everything that they do is basically complementary to that business.

“They give away Gmail. They provide a tonne of capability for servers to accelerate content. They provide really interesting different coverage capabilities like the Google Loon project. Even when you take a look at their infrastructure experiments, they’re all about creating more eyeballs in different vehicles so they can monetise their ad inventory.

"That’s the core of business and everything else is complementary in creating more value for their core business."

He's asking how the same approach can apply to Telstra.

“How do we participate in an ecosystem where these complements drive our core business, which is, in the end, still data access. How do I make data access more of a premium capability that is adding value? You have to tie it to a particular service," Nandlall says.

“So I look at all these other things as complements for something that is inalienably Telstra because not a lot of people can build out that infrastructure which is capital intensive. So you’ve got something that’s a core business asset. How do you drive new value into that? By extending the ecosystem into these different areas.”

As Telstra reinvents itself as a telco for the digital age, Nandlall is looking to drive innovation within the organisation through technologies that lower the cost and risk of failure.

“[Within] any company I’ve seen in the past, there’s a huge amount of professional equity that people invest in to champion a particular program,” he said.

“So the cost of failure becomes quite high because there usually is a reputation at stake, and as a result, that creates a tremendous amount of conservatism in terms of what we actually roll the dice on.

“If we can [transform] our underlying business platform [in a way that] helps to reduce the total cost of failure, it reduces the type of professional equity that people have to invest to champion a particular project.

“That’s usually the place where I target: let’s get into a mode where I can out-experiment the rest of the competition.”