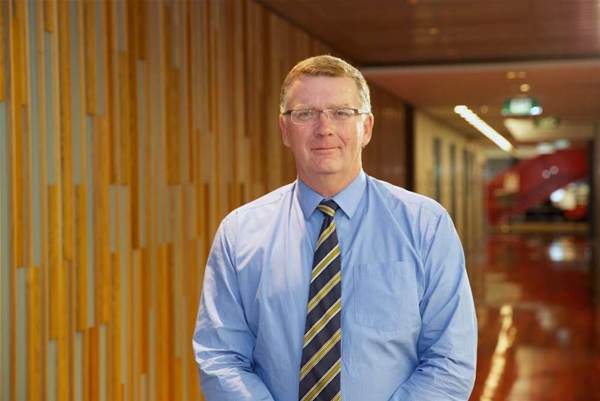 Banks don’t need chief innovation, data or digital officers, says Westpac’s Dave Curran. They’ve just got to get on with the job.

Australia’s banks are likely to lose a few toes to the startups nipping at their heels, but Westpac Group CIO Dave Curran thinks it highly unlikely anyone will lose a leg.

Curran, appointed into Westpac's top technology job in July, is a pragmatist when it comes to the subject of digital disruption.

On the one hand, he’s cognisant that disruption is "coming at us fast."

“Increasingly, we are seeing startups literally created overnight with a scale and capability that we couldn’t have imagined ten years ago,” Curran told an FST Media conference earlier this month.

“These startups are very publicly stating that they are coming after the banking business.”

But on the other hand, Curran cites three reasons why the business of a major bank is hard to fundamentally disrupt.

First and foremost, banking in Australia is a heavily regulated industry, he stressed, and Westpac has developed skills and processes to deal with that over 200 years.

Second, the banking sector relies on the highly intensive use of capital, which startups don’t tend to have ready access too.

The third reason banks are difficult to disrupt, he said, is the trust and reputation built up with customers over relationships that span decades.

Why then is the financial sector fretting about new market entrants in payments, new modes of lending and alternative currencies?

Curran says the fact that payments is so often cited as a point of disruption only serves to illustrate his point.

“There has arguably been more activity in payments than anywhere else,” he said.

"When you look at what banks are coming up against, payments is the area with the least regulations, the least need for capital" - and it is more concerned with the passing of funds between known and trusted parties rather than entrusting one entity with storing your future livelihood in a digital form.

Where Curran does agree with the digital consultants is that the combination of cloud computing, data analytics, social and mobile technologies have created the potential for disruption.

But he feels banks have just as much opportunity as the ‘born in the cloud’ challengers to use these tools to its advantage.

“I have a view that over the last 10-15 years, the banking sector has addressed needs given to us, but we haven’t responded to the changing environment with the urgency required,” he said.

“In the last 20 years of banking, there hasn’t been a lot of innovation in the product space - the introduction of mortgage offset or scheme debit were simply a combination of existing products or channels.

“The technology community within financial services now needs to become more proactive. We have to be our own disruptors. We have to stop letting others disrupt us and start disrupting ourselves.”

Curran sees future innovation in banking and finance – while requiring some adoption of cloud, analytics, mobile and social - hinging mainly on a bank’s mastery of customer data.

His first priority at Westpac has been to “clean up the beaches”, putting forward an architecture that aims to strip customer data and business logic out of systems of engagement (front-end apps). He also wants to plan Westpac’s future core systems around the customer record, rather than the products offered by the bank.

“While we have all of this capability around customer tracked in our product systems, it doesn’t enable us to be as agile as we want to be in our customer systems,” he explained.

If Westpac’s technology team adhere to his vision, he expects the bank will be able to be a lot more ambitious around the bundling of services, or even consider the offering of ‘custom’ products long yearned for in financial services sector.

“If you had this dynamic capability, combined with the data from systems of insights, you start to get all sorts of more compelling customer propositions, which is where banking needs to go,” he said.

“The days of banks being product selling companies are long over.”

Curran is keen to avoid letting the ‘digital’ and ‘innovation’ crazes distract his team from the hard yards ahead.

“I don't think I'm an arrogant person, and Westpac is not an arrogant organisation, so of course we are cognitive of what's happening in the competitive space,” he said. “But you can't let that distract you from your strategy and vision and what you need to do."

He doesn’t, for example, see it as necessary to spin an innovation group out of his technology team as other companies have, to give them the freedom to challenge existing revenues and value propositions.

Changes will almost certainly be made to Westpac’s technology team during his tenure, but these will align with the vision he’s put forward rather than a concerted effort to be innovative in the digital sphere.

“I don't have strong views on organisational structures and frameworks,” he said. “I have no favourite method and structure. I am a simple and logical person. I tend to think if you have a good answer for 'why', the 'what' and 'how' can take care of themselves.

“I will spend a lot of time providing the why to my team. In my view, it's not which method or model is better than another, it's about how clear and simple and logical is your approach and how dedicated and disciplined are you around it.”

Besides, Curran sees innovation as everyone’s job at Westpac.

“The last thing a CIO can afford to be is a chief innovation officer,” he said. “People who think they own innovation are kidding themselves. Innovation comes from all sorts of places.

“My job is to create the framework on which we continue to innovate, so that when you have innovative ideas, you can test and prove them quickly.”

That might mean, for example, coming up with ways to encourage the sharing of skills and resources across the group so that if the Bank of South Australia achieves something extraordinary, that good idea can quickly be executed across Westpac and St George.

He also doesn’t believe large organisations need to appoint ‘chief digital officers’ or ‘chief data officers’ to focus on these emerging areas. To isolate either digital or data into distinct domains, he said, reduces them to technology issues, rather than the “foundations of so much of what we do as a bank".

“I expect all of my team to be continually developing skills and disciplines in these areas,” he said.

Success in the digital landscape will depend largely on developing a culture within Westpac IT that values clarity, simplicity, collaboration and trust, he said.

“We need to work horizontally and not just within vertical silos. We need a clear articulation of our architecture, and we have to be best-in-class at integration - because we will only build when its a necessity rather than as a starting point.”

Read Part I of our chat with Dave Curran here.