Probe shows Venus 'as never before' 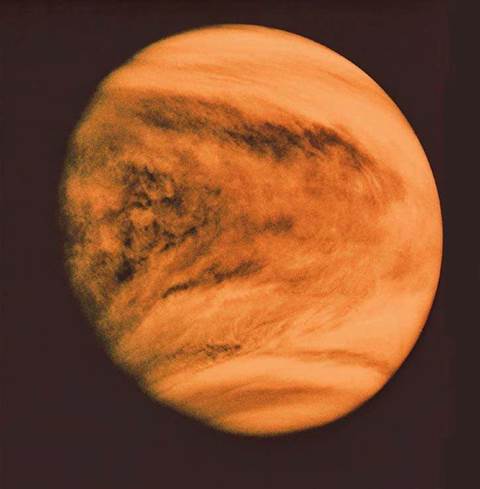 The European Space Agency has published images of Venus "as the planet has never been seen before".

Venus Express has been capturing atmospheric details of day and night areas simultaneously at different altitudes. The images include details of the south pole of the planet and its gigantic double storm vortex.

In the search for possible clues on how to solve the 'puzzle' of this atmospheric phenomenon, the team of scientists behind the Ultraviolet, Visible and Near-Infrared Mapping Spectrometer (Virtis) onboard Venus Express, have tried something new: starting from the south pole.

They started by focusing on this target from the advantageous position of the orbit apocentre (the furthest distance of the spacecraft from the planet).

This allows the instrument to keep the target in the field of view for longer than in other portions of the orbit, where the spacecraft travels faster. In this favourable position, scientists made efficient use of the multi-wavelength capability of Virtis.

By using wavelengths longer than 3-microns in the thermal infrared range, Virtis can obtain a combined view of the day and night sides simultaneously.

This is more convenient since, at shorter wavelengths, the difference between the thermal radiation emitted on the day and night sides is too high to observe both regions simultaneously without 'blinding' some channels of the camera.

"It is comparable to looking at bright, sun-illuminated snow and at a dark sky without having to change your glasses," said Giuseppe Piccioni, Virtis co-principal investigator.

"In addition, within this observation process, not only can we look at the dark and lit sides of the south pole at the same time, but we can look into the atmosphere at different depths.

"What we are building is the most complete 3D data set of the Venusian atmosphere to date."
Got a news tip for our journalists? Share it with us anonymously here.
Copyright ©v3.co.uk
Tags:
as before never oddware probe shows venus